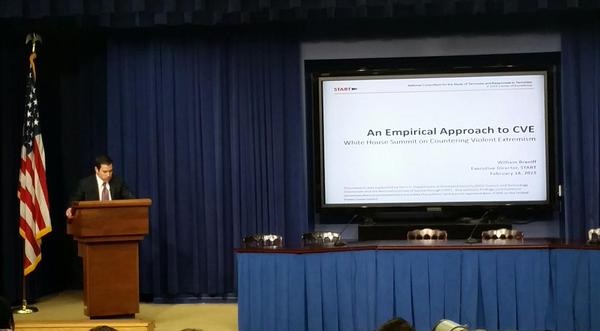 As a part of the summit, the White House released a strategy to counter domestic violent extremism that includes appointing a full-time CVE Coordinator at the Department of Homeland Security and partnering with three cities; Boston, Los Angeles and Minneapolis-St. Paul, to pilot programs that integrate communities, government service providers and law enforcement agencies to address violent extremism.

During his presentation, Braniff spoke about trends in worldwide and domestic terrorism, radicalization in the United States, lone-actor terrorism, and empirical research on countering violent extremism and community resilience. The presentation referenced the following projects funded by the Department of Homeland Security Science and Technology Directorate (DHS S&T) and the National Institute of Justice (NIJ) and the State Department:

The presentation slides can be seen here.

In addition to Braniff’s speech, START received another mention at the summit – this time by Attorney General Eric Holder. Holder told attendees that the administration was initiating two studies as a part of its counterterrorism effort, including one at the University of Maryland exploring the similarities between violent extremist groups and criminal gangs, which is a reference to an upcoming START project funded by the National Institutes of Justice (NIJ).

On Sunday, February 22, Braniff appeared on C-SPAN’s Washington Journal to discuss his experience at the summit. Braniff said “I learned that there is a group of really charged-up people who are excited to be recognized domestically for really trying to push this agenda forward (despite) an uphill battle.”

When asked what one of his major takeaways from the event was, Braniff responded “The most common critique don’t spend enough time talking about ideology. At the summit, there was a lot of discussion of the ‘root’ causes of terrorism; things like poor governance or poor economic performance and how that can drive people into the arms of extremism. While that’s certainly part of the story…in the short term, we have to understand the road map to action; the thing that takes people with a set of potential grievances and convinces them that it’s their individual duty to engage in violent extremism,” adding, “Communities are the ones who typically lead in CVE efforts, not the government.”