Book Talk: Turning to Political Violence: The Emergence of Terrorism

On Tuesday, February 26th at 12:00 noon at START Headquarters, Dr. Marc Sageman will give a presentation on his book, Turning to Political Violence: The Emergence of Terrorism. This event is free and open to the public, but RSVPs are appreciated. If you are not a START affiliate, please email Eva Coll (escoll@umd.edu) if you're interested in attending for more information. 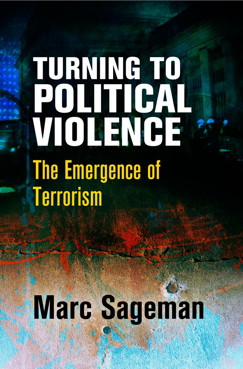 What motivates those who commit violence in the name of political beliefs? Terrorism today is not solely the preserve of Islam, nor is it a new phenomenon. It emerges from social processes and conditions common to societies throughout modern history, and the story of its origins spans centuries, encompassing numerous radical and revolutionary movements.

Dr. Marc Sageman is a forensic psychiatrist and government counterterrorism consultant whose bestselling books Understanding Terror Networks and Leaderless Jihad provide a detailed, damning corrective to commonplace yet simplistic notions of Islamist terrorism. In a comprehensive new book, Turning to Political Violence, Sageman examines the history and theory of political violence in the West. He excavates primary sources surrounding key instances of modern political violence, looking for patterns across a range of case studies spanning the French Revolution, through late nineteenth- and early twentieth-century revolutionaries and anarchists in Russia and the United States, to the assassination of Archduke Ferdinand and the start of World War I. In contrast to one-dimensional portraits of terrorist "monsters" offered by governments and media throughout history, these accounts offer complex and intricate portraits of individuals engaged in struggles with identity, injustice, and revenge who may be empowered by a sense of love and self-sacrifice.

Arguing against easy assumptions that attribute terrorism to extremist ideology, and counter to mainstream academic explanations such as rational choice theory, Sageman develops a theoretical model based on the concept of social identity. His analysis focuses on the complex dynamic between the state and disaffected citizens that leads some to disillusionment and moral outrage—and a few to mass murder. Sageman's account offers a paradigm-shifting perspective on terrorism that yields counterintuitive implications for the ways liberal democracies can and should confront political violence.

Dr. Marc Sageman, a forensic psychiatrist, is a government counterterrorism consultant. He is author of Misunderstanding Terrorism, Leaderless Jihad, and Understanding Terror Networks, all of which are available from the University of Pennsylvania Press.