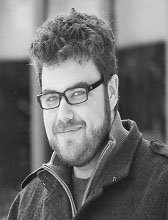 Armed with a bachelor’s in History, Boyd received his master’s in Philosophy and Social Policy from The George Washington University and is finishing up his doctorate in Earth Systems and Geoinformation Sciences at George Mason University, where he is also an adjunct professor. Between researching, teaching and studying, Boyd also is working to improve his coloring and exploring skills under the supervision of his two daughters.

How did your interest in sociology lead you to working in GIS?

When I finished my undergraduate degree, I had a strong desire to help affect some sort of positive change on the world.  Like most undergraduates, I had a vague understanding of what this meant.  A severe misreading of modern philosophy brought me to George Washington University where I studied philosophy and social policy and found a place in urban inequality research.

My doctoral research has been, from the beginning, on the cusp of sociology and geography.  My research interest in sociology is perfectly encapsulated by my partner, Melissa’s, definition of the field, “it is the study of the distribution of scarce social resources.”  And in that way, it is a play on economics.  Likewise, what draws me to geography is its economic and regional science subfields where researchers focus on the why and how of the unequal spatial distribution of goods, peoples, and income (among other factors).

While geography can explain the spatial distributions of inequality, sociology provides the social basis for why those inequalities might exist.  And the way I approach the academic topic of terrorism is very much from a perspective of inequality: terrorism takes place because of perceived or real inequalities in the political or social system.

What drew you to studying terrorism at START?

I first met a group of START researchers in early 2013 when I sat in on a briefing they gave on an early model of TransIT (Transnational Illicit Trafficking Geospatial Tool).  I struck up a conversation with their GIS analyst at the time, Ruth Bluestone.  Over time, we became friends and I ended up meeting more START researchers.  After about a year, it became clear that I would be a good fit here at START.  I believe in the organization’s mission, its focus on experiential learning, and understanding terrorism in its many forms.  The senior staff at START wanted to create a GIS division and I was, and still am, honored that they asked me to lead it.

I try to make our work collaborative because I find it the best way to convey knowledge—we let the best ideas rise to the top of the pile.  I would like to tell you that it’s as exciting as the walk-and-talks from The West Wing, but we really aren’t that thrilling.  We do throw ideas, project proposals, and advice back and forth, but it usually happens while we’re sitting in a room.

My best days at START are when I’ve managed to do one of three things: 1) help a student determine a direction for their career; 2) finish up a research paper or report, and/or 3) had a solid conversation with a colleague that leads us to the next big idea/funding/research project.

Do you have a favorite project you’ve worked on with START?

I’ve very much enjoyed working on the TransIT project.  It’s a project that we are creating to map the licit and illicit pathways around the world.  In the process, we’ve found some really spectacular information.  It’s been rewarding to bring together so many different aspects of the social and physical sciences into one project.

As excited as I am about TransIT, I am equally looking forward to our research trajectory in GIS.  We are going to be incorporating social, political, economic, and physical geography into our research in a way that START hasn’t done before.  By further mixing the physical and social sciences, I believe that START GIS will be working on innovative projects that help define everything from community policing policy to spread of disease.

How has the field of GIS changed since you started researching?

When I started working with GIS, there was less of an emphasis on programming and coding.  This change is not a bad thing, it forces geographers to interact better with computer science and has taken GIS far beyond where it was when I first played with it.  We now have advanced GIS that most of the world touches every day. Look at Google Maps, Bing Maps, Google Earth, and OpenStreetMap to name a few; the proliferation of smart phones has given anyone who has one access satellite navigation and accurate maps.  None of that would be possible without tremendous advances in the field of Geographic Information Science.

I first learned GIS at Virginia Commonwealth University in 2006.  The professor was still using ArcView 3.3—which means nothing to most people—but if I asked Eamon, our head of IT, to replace ArcGIS 10.3 with ArcView 3.3, my staff would run away screaming.  It’s basically the difference between Pacman and the latest PlayStation or Xbox game.  So, that comparison alone should give an idea of how much the field of geographic information systems has changed in almost ten years.

Do you prefer teaching or research and why?

This is a difficult question and I’m going to punt and say both.  Teaching is an incredibly rewarding job and I’m grateful that I get to do that sometimes.  Research is my life, though.  I am exceedingly comfortable planning out new ideas and testing them.  Also, research is far more collaborative than teaching.  I love serving as a mentor and both teaching and research give me the opportunity to do that.

I try to make as much time as I can to help START interns set career and educational goals.  For many of them, START is their first professional experience as a GIS analyst and, because GIS is such an expansive field, I make time to help them sketch out a road map towards their goals whether it’s in policy, a government agency, as a city planner, or environmentalist.

My strong belief in mentoring comes from the general lack of direction that I felt coming out of high school and my undergraduate studies.  It took a long time to find a mentor who could help me organize my goals into action.  The earlier we can reach students and help them find their compass, the more successful they are going to be.

What do you enjoy doing outside of work?

There are many things I enjoy doing outside of work, but it’s difficult to make time for everything.  I have two daughters -- Julie is four and Abigail is three -- so I spend a good deal of time answering “why” and “how” questions, being a prince/bear/monster, and coloring.  Now that we’re getting into spring, it’ll be back to the playground and to the mountains for walks and picnics (Julie fell in love with the movie Brave and is still determined to see “a real, live bear” so we go to the mountains to look for one).  Much of my non-dad time is taken up by reading articles and scanning data for research projects and my dissertation.  But when I have the time, I have three or four books I’m slowly making my way through and I’m an avid guitar player.

National Institute of Justice: Hate crimes: National database identifies traits and motivations marking distinct pathways of people who commit bias-based offenses
Business Insider: Inside a DC jail's 'Patriot Wing,' where Capitol riot defendants sing the national anthem and act like prisoners of war — but struggle to cope with being locked up
USA Today: When does speech become dangerous? Rep. Gosar’s ties to white nationalists added to concerns about his video
END_OF_DOCUMENT_TOKEN_TO_BE_REPLACED