William Braniff, executive director of the START Consortium, served as an expert witness providing Congressional testimony on “The State of Al Qaeda, its Affili

Braniff said that 2012 was the most active year of terrorism on record and that the six deadliest terrorist groups in 2012 all had alliance connections to al-Qaida. Braniff featured START data and analyses from the Global Terrorism Database and the Big, Allied and Dangerous Project.

He discussed the following four reasons for this activity:

He also discussed the consequences of those activities and the intertwined histories of local, regional and global jihadist actors. 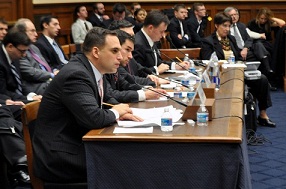 vement benefits from resources mobilized for other purposes: as long as there are local and regional jihadist fronts, global jihadist actors will have access to resources that they can direct against the “far enemy,” Braniff said.

In addition to ready supplies, the variety of local, regional and global jihadist groups provides multiple entrances to any conflict zone. According to Braniff, that is illustrated by Najibullah Zazi, who left the United States to join the Taliban and defend Afghanistan. He was then redirected by al-Qaida to plot suicide attacks against the New York City subway system.

“Zazi was not primed to target American civilians when he entered into this militant ecosystem, but the geographic colocation of local and global jihadist organizations enabled that eventuality,” Braniff said.

Braniff also discussed how al-Qaida propaganda can increase the chances that Western interests will be targeted in foreign settings and how the group has inspired a new cohort of individuals to act.

Despite the fact that al-Qaida itself was not responsible for any terrorist attacks in 2012, he concluded that al-Qaida and its strategy of enabling the violence of other organizations should not be considered ineffectual.

“This has been the most active two years in the history of modern terrorism, and al-Qaida remains at the historical, organizational, and ideological center of the most lethal terrorist threats of our time,” Braniff said.

The testimony can be viewed online at http://armedservices.house.gov/index.cfm/2014/2/state-of-al-qaeda-its-affiliates-and-associated-groups-view-from-outside-experts.