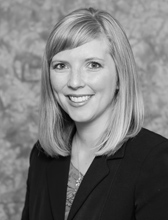 Jessica Stark Rivinius is currently the Director of News and Media Relations at Miami University of Ohio. While at START, she was the Director of Communications, where she served as part of the organization’s senior leadership team and the primary liaison between START and the local, national and international news media.  Prior to joining START, Rivinius served as the assistant director of media relations for Rice University. Her unique ability to develop and pitch faculty stories, research findings, student successes and University initiatives, contributed to her team which increased Rice’s media coverage by more than 730 percent in just four years.

From 2003 to 2007, Rivinius conducted media relations at Ohio University. In addition to her responsibilities of writing press releases and feature stories, coordinating press conferences and working with reporters, she designed and implemented a multi-year-multi-faceted marketing communication plan for a new $60 million Student Center.  Rivinus’s breadth of work spans media relations campaigns, crisis communications and fundraising initiatives and events. Her expertise has helped organizations increase their coverage in the news media, position themselves as thought leaders on key issues, build public support and secure funding and grants.

She has worked with university presidents and other senior level administrators to prepare them for high-level speaking engagements and high-profile media interviews.  An advocate for nonprofits, Rivinius was recognized for her volunteer commitment to the Ronald McDonald House in Texas Children’s Hospital. She has also served as public relations chair for Athens County Habitat for Humanity, an advisor for Delta Gamma Fraternity and treasurer of its Houston Alumnae group.  A Cincinnati native, Rivinius began her career as a broadcast news reporter in Ohio at WOUB-TV and The Ohio News Network.

She earned her B.S. in Broadcast Journalism, with specializations in business and political science, from the E.W. Scripps School of Journalism at Ohio University and hopes to complete (“someday, when my kid is older”) the MBA she started in 2006.