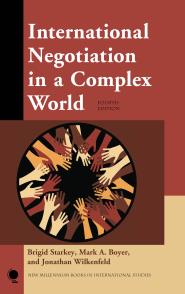 On Monday, April 11 from 12:30 to 2:00 p.m., Jon Wilkenfeld, professor of Government and Politics at the University of Maryland and director of the ICONS project, will give a presentation on his book "International Negotiation in a Complex World" at START headquarters. The event is free and open to the public, but RSVP's are appreciated.

Professor Wilkenfeld is a specialist in foreign policy decision-making, crisis behavior, and mediation, as well as in the use of simulation in political science. Since 1977, Wilkenfeld has served as co-Director (with Michael Brecher) of the International Crisis Behavior Project, a cross-national study of international crises in the twentieth century. The project has served as the basis for systematic research into a range of crucial foreign-policy issues, including state motivations during times of crisis, conflict management practices, and protracted conflict trajectories.

Wilkenfeld serves as Director of the ICONS Project, which provides decision-makers with interactive training experiences in the fields of conflict behavior, negotiation, and crisis management. The development of the International Communication and Negotiation Simulations (ICONS) Project grew out of his long-term interest in integrating technology and simulation techniques into the teaching of negotiation and international politics. Under his direction, the ICONS Project won numerous awards for innovation and excellence, including in 1994, the Distinguished Program Award presented by the Maryland Association for Higher Education for the ICONS instructional model, and in 2001 the University of Maryland Award for Innovation in Teaching with Technology. Her has also won awards from the International Studies Association as a Distinguished Scholar. In 2009, Wilkenfeld was designated by the University of Maryland as a Distinguished Scholar-Teacher.

His most recent books include A Study of Crisis (1997 and 2000, with Michael Brecher); Negotiating a Complex World (1999, 2005, 2010 with Brigid Starkey and Mark Boyer); Mediating International Crises(2005, with Victor Asal, David Quinn, and Kathleen Young); and Peace and Conflict (2008, 2010, 2012 with Joseph Hewitt and Ted Gurr). Wilkenfeld's current work focuses on mediation processes in intrastate conflicts and crises.