The future of the Hamas Movement: A journalist’s perspective

On Thursday, March 26, Shlomi Eldar, journalist-in-residence at the Gildenhorn Institute for Israel Studies at the University of Maryland and contributing writer for Al-Monitor’s Israel Pulse, gave a talk at START headquarters on the current state of the Hamas movement. 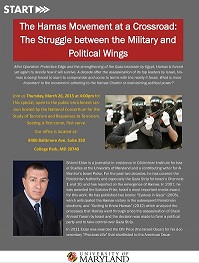 The event, “The Hamas Movement at a Crossroad: The Struggle between the Military and Political Wings,” was co-sponsored by the Gildenhorn Institute. Eldar provided attendees with an insider’s perspective on the situation in Palestine and offered his predictions for the future of the Hamas movement.

Eldar discussed individual motivations and influences of each wing. With so many actors in the mix, Eldar noted several internal conflicts within Hamas, focusing heavily on the varying military and political ideologies within the organizational structure.

He hypothesizes that Mohammed Deif, the leader of the Gaza military wing, will play a key role in the future of Hamas and act as a decisive leader for the organization. He also warns that Hamas-Turkey has an abundance of resources and will motivate other wings in the organization through funding.

Eldar spent the past two decades covering the Palestinian Authority and the Gaza Strip on Israeli television.  He has also won several awards for his work in media, literature and film. A video recording of Eldar’s talk will be released in the coming weeks and made available through our social media outlets, as well as the Gildenhorn Institute’s website.