With the advent of Geographic Information Systems (GIS) in recent years, there has been growing interest in the field of terrorism and counter-terrorism research, particularly in the geospatial context. This piece demonstrates the versatility and potential of the Global Terrorism Database (GTD) [1] in assessing security vulnerabilities of critical infrastructure in major cities in the Middle East. By analyzing the frequency of attacks, or lack thereof, against particular infrastructure targets, a better understanding of the motivations of terrorist groups and individuals can be developed.

By investigating terrorist attacks [2] within a 5 kilometer radius of the Qudis Gas Power Plant, the Sadr Power Plant, and the Baghdad South Plant in the vicinity of the city of Baghdad, Iraq, it is possible to develop an empirically grounded assessment of the facilities’ vulnerability. Careful analysis of the GTD data from 2015 [3] in Baghdad and western Diyala governorate revealed that there were approximately 981 attacks within the Baghdad metropolitan area, excluding attacks that could not be independently verified by reliable sources (see figure 1). The combined attacks during this period resulted in over 1,265 fatalities and 4,898 injuries. 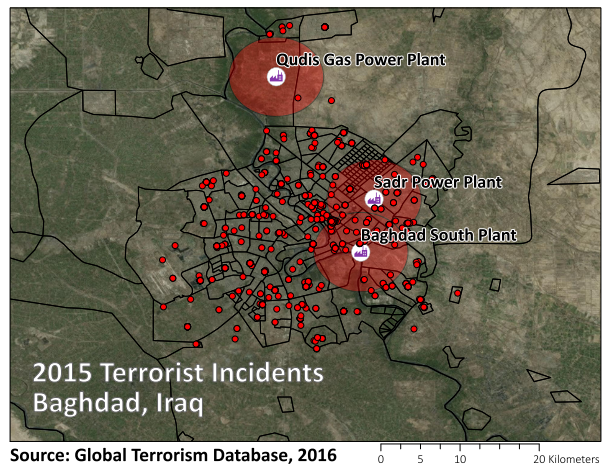 To investigate the terrorist attacks which occurred near each power plant, I used ArcGIS Pro, a geographic information system, to select the individual incidents occurring within the 5 kilometer buffer zone surrounding each plant. From the initial 981 attacks in the Baghdad area, it was determined that there were 207 attacks which occurred in the vicinity of the selected power plants. What can be immediately observed by looking at Figure 1 is that the distribution of attacks did not occur uniformly across the three power plants. The vicinity of the Baghdad South Power Plant and the Sadr Power Plant witnessed 137 attacks and 103 attacks respectively, [4] whereas the area surrounding the Qudis Gas Power Plant located further north of the city experienced just one attack in 2015.

What this reveals, unsurprisingly, is that attacks were concentrated largely in urban areas, irrespective of proximity to the power plants. Inspection of the data reveals that the rural Qudis Gas Power Plant itself was never attacked in 2015, according to the incident details available in the GTD. To identify whether the remaining 206 incidents that occurred in the vicinity of the other two power plants actually targeted the facilities themselves, I used information from the targets variables in the GTD, specifically looking at the target type. This analysis reveals that not one of the 206 attacks were determined to have been targeting electricity or power infrastructure in the vicinity of the power plants. Furthermore, in the entire Baghdad metropolitan area for 2015, the data revealed that electricity infrastructure had been targeted only four times in various other areas of Diyala governorate, all of them transmission lines.

Analysis of the data from 2004-2014 reveals that there were only 26 attacks on electricity infrastructure over that time period, and only on three separate occasions were the attacks targeting power stations in and around Baghdad. Most recently, the Qudis facility to the north of Baghdad was targeted in a rocket attack in 2009, [5] an attack was carried out on an unidentified power station in the Sadr City area on Faleh Street in 2008, [6] and an attack occurred on another power station in the south of the city in 2006.[7] Using the GTD data and a variety of GIS techniques, this investigation has shown that electricity generating infrastructure in and around Baghdad has not been a primary target of terrorist attacks, despite its presence in a major metropolitan area that experiences hundreds of attacks every year.[8]

There are several important factors to consider when approaching a vulnerability assessment such as this. These include: What role did passive and active security measures provide in discouraging, deterring, and defending the critical power infrastructure? What role did the terrorist’s short-term or strategic goals play in making the determination not to select these targets? And perhaps most importantly, what does this tell us about the assailants’ long-term strategic objectives for the city of Baghdad?

While the geospatial methodology and quantitative data analysis alone cannot answer these questions, they provide critical support and insight in developing a comprehensive understanding of terrorists’ motivations and objectives. One important limitation to consider is that while incidents are typically geocoded at the neighborhood level in Baghdad for attacks that occurred in larger cities after 2014, there are many instances where additional location information pertaining to higher resolution spatial data is not available in the media sources. For example, the Sadr City area of Baghdad is over 25 square kilometers, and an attack with only general location information introduces a very wide geographic area of uncertainty. For this reason, it is necessary to understand the limitations of the analysis, and to treat each study area as a unique environment with sui generis considerations.

[1] National Consortium for the Study of Terrorism and Responses to Terrorism (START). (2015). Global Terrorism Database [Data file]. Retrieved from http://www.start.umd.edu/gtd

[2] Terrorism as defined by the Global Terrorism includes the threatened or actual use of illegal force and violence by a non-state actor to attain a political, economic, religious, or social goal through fear, coercion, or intimidation.

[4] Due to overlaps in the 5 kilometer buffer area of the Baghdad South and Sadr power plants, which are located approximately 7 kilometers from each other, some individual incidents were included in each buffer count. There were 206 unique attacks in the vicinity of the two plants.

[8] National Consortium for the Study of Terrorism and Responses to Terrorism (START). (2015). Global Terrorism Database [Data file]. Retrieved from http://www.start.umd.edu/gtd