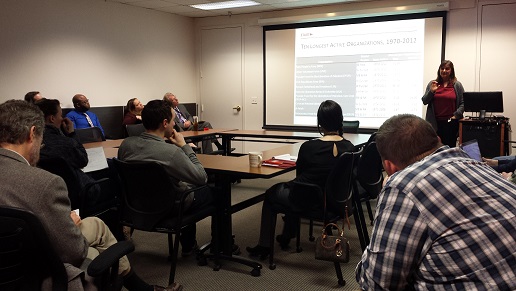 In late 2001, following the September 11th terrorist attacks, researchers at the University of Maryland obtained a large database originally collected by the Pinkerton Global Intelligence Services (PGIS). The database contained information on terrorist attacks dating back to 1970, printed hard-copy on a series of index cards. The researchers, funded by the National Institute of Justice (NIJ), digitized the data, making corrections and adding additional information wherever possible. This eventually led to the creation of the Global Terrorism Database, START’s massive, open-source database containing information on over 125,000 terrorist attacks worldwide, used widely by the counterterrorism professionals, policymakers, academics, reporters and members of the public all over the globe.

On Wednesday, March 25, START director Gary LaFree, GTD Program Manager Erin Miller and GTD co-principal investigator Laura Dugan presented findings from their new book, “Putting Terrorism in Context: Lessons from the Global Terrorism Database.” The book was released in December and provides a “comprehensive empirical overview of the nature and evolution of both modern international and domestic terrorism.”

The idea to write a GTD book emerged early-on in the process of creating the database, but LaFree, Miller and Dugan only recently had the time and resources to do so. “We wanted to write a book for a very long time,” Dugan said. “Something written at the undergraduate level, which would serve as the ‘quintessential citation’ on matters of global terrorism.”

LaFree began the lecture by discussing trends over time regarding data about the frequency of attacks in different countries/cities, and by different perpetrator groups. He also introduced the concept of "black swan" events, which are high-impact, unpredictable attacks (9/11, for example). According to LaFree, these events are not always reflective of larger trends in data and can often create misleading impressions about the typical location(s), perpetrator(s), or lethality of a terrorist attacks.

Dugan spoke next, and dove deeper into the data to help better explain the broad trends that LaFree examined. Again, Dugan pointed out that the GTD data often defies traditional thinking about terrorism.

For example, while many might think that the perpetrators of terrorist attacks are usually obvious, GTD data show that about half of all attacks cannot be linked with confidence to a specific person or group.  Furthermore, of the terrorist organizations for whom attacks are attributed in the GTD, approximately 60 percent are short-lived, meaning the groups last for less than one year. Additionally, the most commonly-used weapons in GTD events are explosives and firearms, with the biggest terrorism targets being private citizens and property. Many of these facts, Dugan says, surprise the general public, as the complex or exotic attacks that frequently capture the imagination of the media and entertainment industry are frequently atypical.

Dugan also talked about tactical innovations in terrorism being similar to the early-adopter S-curve seen in the ‘diffusion of innovations’ theory, developed by Everett Rogers in 1962. Once a tactic gains traction, it becomes favored among increasing numbers of terrorists for a short period of time before plateauing. To demonstrate this analysis, she compared the diffusion of suicide terrorism, chemical and biological attacks, and aerial hijackings

Finally, Miller spoke about the lethality of terror attacks, and the complexity of differentiating between international and domestic terrorist attacks. Contrary to popular belief, Miller says a majority of the terrorist attacks since 1970 have been non-lethal, adding the caveat that a small number of cases, like the September 11th attacks, can have a disproportionate impact on the lethality statistics. Also contrary to commonly-held wisdom, the prevalence of international terrorist attacks in which an individual crosses a border to conduct an attack does not seem to be increasing over time as a percentage of total attacks worldwide. As has been true in the past, most attacks are conducted by domestic actors against domestic targets.

While all three researchers were confident in their findings that conventional wisdom does not reflect the overall trends in data due to the impact of "black swan" events, they were also quick to mention that the criteria for inclusion in the GTD, and even the definition of terrorism itself, is complex to apply. Detailed information is often unavailable in open sources. As Dugan put it, “The GTD is a powerful set of data…from which we can glean a lot of information about specific terrorist organization and what they do. However, it is a vast database and we are always making corrections and improvements.” The book deals candidly with the limitation of the GTD, as well as its capabilities.

Putting Terrorism in Context: Lessons from the Global Terrorism Database is currently available for purchase in hardcover, and a paperback version will be released in late 2015.