Liberty Day sits down with NJOHSP

Liberty Day sits down with NJOHSP

The New Jersey Office of Homeland Security and Preparedness (NJOHSP) hosted the Regional Domestic Terrorism Conference last month. The inaugural conference provided a forum for various organizations from the East Coast to report on terrorist threats that exist in the United States as well as their jurisdictions. Liberty Day presented the Terrorism and Extremist Violence in the United States (TEVUS) portal at the conference, providing an introduction to the database and demonstration of the portal. As START’s training manager, Day assists in efforts to develop a broader training capacity focused on making faculty research findings accessible to policy makers and practitioners. 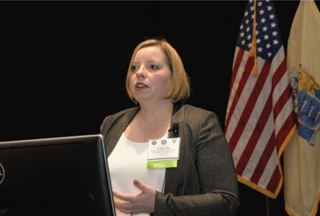 In addition to attending the conference in New Jersey, Day was interviewed as part of NJOHSP’s Intelligence Unclassified podcast, and discussed the research, tools, and educational opportunities available to scholars, policymakers, and practitioners through START. The interview touched on the TEVUS portal, which will be released in limited form this July and released publically in September. The portal is an online interface and visualization tool that provides access to the underlying database. The database itself brings together data from four different but related databases: the Global Terrorism Database (GTD), the American Terrorism Study database, the United States Extremist Crime Database, and the Profiles of Perpetrators of Terrorism in the United States (PPT-US) database. The portal allows access to data related to over 2,800 terrorist incidents, 3,000 pre-incident activities, and 120 extremist crimes. Users can build searches to better understand relationships between the perpetrators, groups, court cases, and events related to terrorism and extremist crime in the U.S. The TEVUS database includes many of the same variables found in the GTD, (infrastructure type, target type, weapons used) but focuses on domestic, rather than global, attacks.

Following the conference, two NJOHSP representatives (Dean Baratta, Chief of the Analysis Bureau and Paige Schilling, an Intelligence Analyst) visited START to learn more about operations, programs, and initiatives. They were given an overview of the research portfolio, introduced to staff members on several research teams, discussed training collaborations, and were briefed on START threat assessment. Currently, NJOHSP and START are exploring new methods of collaboration.

In addition to TEVUS, Day has continued to focus on developing a variety of training products, based on established interest and needs of policy makers and law enforcement. A current list of programs include: a short online lecture about the core capabilities and the durability of ISIL; an online self-paced course on the nexus between terror and crime which is available for continuing education units; and several in-person courses in research methodology, threat assessment, and crisis communication. START is also currently in the process of developing a series of courses appropriate for both law enforcement and civil-society members on Countering Violent Extremism (CVE). START’s first online self-paced CVE course examines radicalization and community engagement and is scheduled for release later this summer.

The TEVUS portal will be released in full in early fall 2016. To request access to a limited release, contact start_tevus@start.umd.edu