From military service to serving others

From military service to serving others 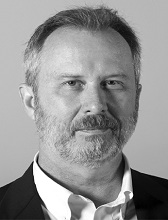 Alongside a Pulitzer Prize-winning novelist, the first Chief Technology Officer in the United States, internationally renowned artists and powerful social activists, START’s Ron Capps was among the headliners of the Johns Hopkins University 2017 Foreign Affairs Symposium for his work establishing the award-winning Veterans Writing Project (VWP).

On behalf of the VWP, Capps offered one of the symposium’s talks and accepted the Anne Smedinghoff Award, named for a JHU alumna and Foreign Service officer killed in a suicide bombing in Afghanistan while trying to deliver books to underserved school children. The award acknowledges those committed to her values: education, development and global harmony.

“I am thrilled that the Veterans Writing Project was chosen for this award,” said Capps, a researcher and scenario developer for START’s ICONS team. “The purpose of the VWP is to continue to serve others. The whole team is committed to that tenet.”

VWP is a Washington, D.C.-based nonprofit founded upon the core belief that every veteran has a story worth telling. Organized and taught by veterans who are working writers and who hold graduate writing or literature degrees, the program provides no-cost writing seminars to veterans, service members and military family members, and commits itself to helping veterans cope with post-traumatic stress disorder.

The idea for the program sprouted as Capps drove home from a graduate-level writing class one night thinking about what he would do when he completed the program. Through the GI Bill, he had used his Veterans Affairs benefits to pay his tuition in JHU’s master’s in writing program.

“I wanted to make sure the taxpayers got their money’s worth,” Capps said. “I mean, writing? C’mon? That’s pretty frivolous, right? So the idea came to me to just give it away. I thought about how that might work, and within a couple of days I had the germ of this program.”

His job as an intelligence officer, and later as a Foreign Service political officer, sparked his interest in becoming a writer. The job required him to travel to remote places, understand what was happening there and explain it to his readers a world away in Washington.

“My job was to explain things clearly, not to add feelings or sentiment,” Capps said. “It’s probably not important what the reporting officer thinks or feels, so you don’t add those details in. That means that much is left out. When I retired I knew I wanted to tell those same stories, tell them to a broader audience, and tell the complete story.”

That is just what he did. He has published essays and short fiction in Time, The American Interest, Foreign Policy, The New York Times and other top-tier publications. Three of his essays have been listed as notable in Best American Essays (2012, 2014, and 2015).

He has also written two books: “Writing War: A Guide to Telling Your Own Story,” which serves as the curriculum for VWP seminars and workshops; and a memoir, “Seriously Not All Right: Five Wars in Ten Years,” which chronicles his own story of post-traumatic stress disorder.

Capps said he hopes that through the VWP, others can find the catharsis he has found through writing about his experiences and the atrocities that occur in war.

He joined the National Guard in 1983 and commissioned in the Army in 1985; he served in Germany and Korea before doing intelligence work in the Americas. He moved to the Army Reserve when he joined the Foreign Service, serving in Central and East Africa, Kosovo and Rwanda. After September 11, he served in Afghanistan, Darfur, Chad and Mauritania for the Army, and Iraq and Darfur for the State Department.  He retired from both the State Department and the Army in 2008.

“At VWP, we aim to give veterans and their families the skills they need to capture their stories and do so in an environment of mutual trust and respect,” Capps said. “Writing is therapeutic.”

“The best moments are getting a veteran to open up for the first time,” Capps said. “When we can do that – really get someone to feel comfortable among us enough to open up – then we’re succeeding.”

Capps recalled a particular moment that has stuck with him.

“During one workshop, a Vietnam veteran sat in the far back of the room and was silent for the first day-and-a-half of the workshop. He took some notes, but didn’t say anything. Finally, just after lunch on the second day, he started telling a story about his experience in Vietnam. It went on for a few minutes and by the time he was done, he was crying, a bunch of others—including me— were crying. It was pretty big stuff. Once he had stopped, his wife looked at me and said, ‘I’ve been married to this guy for 30 years and I’ve never heard any of that.’”

Capps said he hopes that the VWP can usher in a wave of great literature authored by veterans. VWP is building an advice of writing by members of the military community and publishes a quarterly literary journal, O-Dark-Thirty.

To learn more about the Veterans Writing Project or to donate, visit its website here.

The Wall Street Journal: Cities Were Filled With Mass Protests in the Summer of 2020. They Are Different Now.
ISC News: Horizon scanning for future threats: An emerging technique for security
The Atlantic: When Women Lead Protest Movements
END_OF_DOCUMENT_TOKEN_TO_BE_REPLACED