To enable a better understanding of how terrorist organizations network and function over time, the National Consortium for the Study of Terrorism and Responses to Terrorism (START) has launched the Big Allied and Dangerous (BAAD) online platform. The innovative new tool features updated, vetted and sourced narratives, and relationship information and social network data on 50 of the most notorious terrorist organizations in the world since 1998, with additional network information on more than 100 organizations. 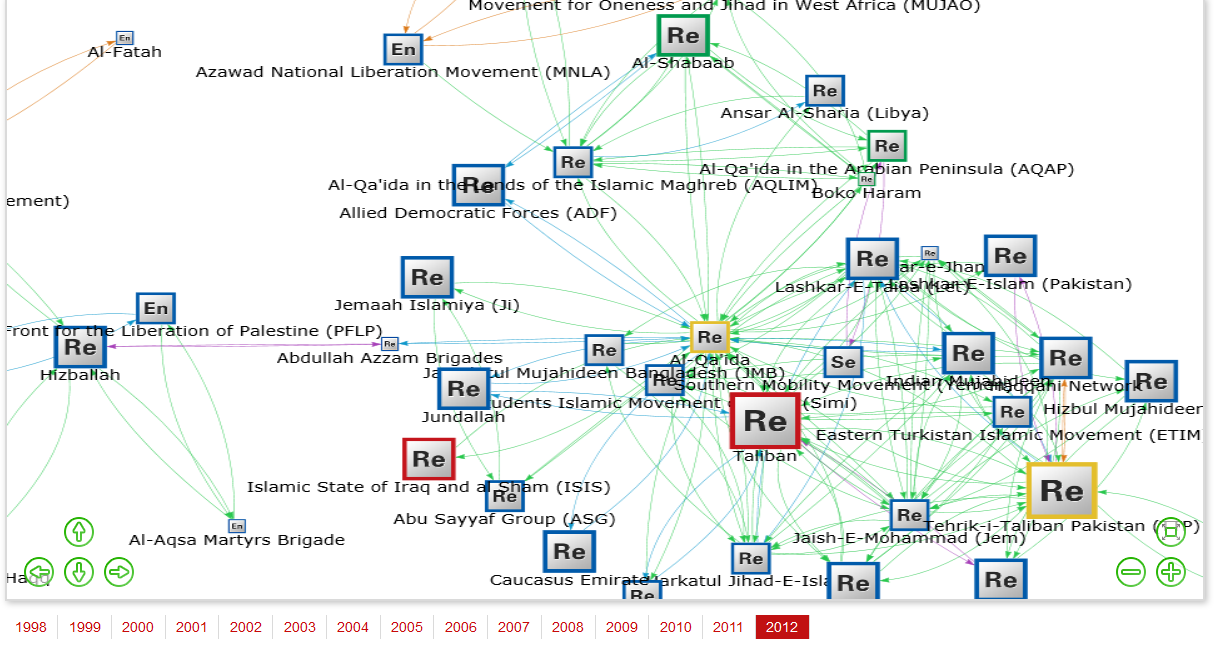 Funded through the Department of Homeland Security’s Science and Technology Directorate’s Office of University Programs, the underlying BAAD database was created and is maintained by the Project on Violent Conflict at the University at Albany’s Rockefeller College of Public Affairs and Policy.

Led by UAlbany professors Victor Asal and Karl Rethemeyer, the research team plans to expand the database and online platform to include more than 600 terrorist organizations.

“The dataset arose from our desire to move the quantitative analysis on terrorist behavior from the country-level to the organizational-level cross-nationally so that we could better explain and predict why some organizations are so much more dangerous than others,” said Asal, Chair of the Department of Public Administration and Policy and Associate Professor of Political Science.

“The Big Allied and Dangerous dataset is unique in that it provides a yearly snapshot of both organizational and network data,” said Rethemeyer, interim dean of Rockefeller College. “We believe that this dataset will help policymakers identify key factors to monitor and provide researchers with new opportunities to understand how the behavior of terrorist organizations changes over time.”

By making this data freely available online, START aims to create a resource for all those interested in understanding terrorism.

“By continuing to generate and update these organizational-level profiles and data, the BAAD team and START can ultimately create a touchstone for organizational-level data, serving as a clearinghouse in the same way that START’s Global Terrorism Database does for incident-level data,” said William Braniff, START executive director. “As most people think of terrorism through the lens of the organizations that commit these acts, BAAD provides an important public good – a starting point on which further analysis can be based.”

BAAD is drawn entirely from publicly available, open-source materials. These include electronic news archives, existing data sets, secondary source materials such as books and journals, and legal documents. All information contained in the dataset reflects what is reported in those sources.

Entities included in BAAD are defined as those organizations that have:

BAAD is already being used to better understand broad questions about terrorism.

“Our work is helping to identify key factors that enable and motivate dangerous behavior by terrorist organizations like use of chemical weapons,” Asal said, referring to work the team is conducting with Joseph Young at American University. “We are also examining whether counter-terrorism efforts by governments around the globe are actually working. BAAD is the first dataset that makes it possible to ask questions about both of these issues using cross-national data.”

The BAAD online platform can be accessed on START’s website at www.start.umd.edu/baad/database. The dataset and platform development were funded through grants made through START by the Department of Homeland Security Science and Technology Directorate’s Office of University Programs. Additional funding for the development of the dataset was provided by the Defense Threat Reduction Agency, the Office of Naval Research, the National Science Foundation, and the University at Albany’s Faculty Research Awards Program.

The National Consortium for the Study of Terrorism and Responses to Terrorism (START) is supported in part by the Science and Technology Directorate of the U.S. Department of Homeland Security through a Center of Excellence program based at the University of Maryland. START uses state‐of‐the‐art theories, methods and data from the social and behavioral sciences to improve understanding of the origins, dynamics and social and psychological impacts of terrorism. For more information, contact START at infostart@start.umd.edu or visit www.start.umd.edu.

About the University at Albany:

Educationally and culturally, the  University at Albany-SUNY puts "The World Within Reach" for its more than 17,300 students. An internationally recognized research university, we offer  120 undergraduate majors and minors and more than 125 master's, doctoral, and graduate certificate programs.  UAlbany is a leader among all New York State colleges and universities in such diverse fields as atmospheric and environmental sciences, business,  criminal justice, emergency preparedness, engineering and applied sciences, informatics, public administration, social welfare, and  sociology taught by an extensive roster of faculty experts. With a curriculum enhanced by 600 study-abroad opportunities, UAlbany launches great careers.