“How have you proved the haters wrong?” The question is sweeping across social media platforms thanks to a group of University of Maryland students attempting to oppose the online recruiting efforts of terrorist groups and other violent extremists. 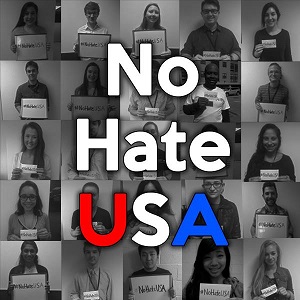 Developed by START’s Countering Violent Extremist Fellows, the “No Hate USA” campaign encourages people to openly share an experience in which they have “proved the haters wrong” and then challenge their friends to do the same. Participants can win prizes up to $250 for the top featured stories and top retweeted tweets.

No Hate USA, which stands for National Outreach for Hate Awareness and Threat Education, aims to engage and empower youth to stand against targeted violence across the United States through the creation of a supportive community via social media.

Essentially, the idea is to combat extremist terrorist groups like ISIS, who have been utilizing social media platforms to recruit Westerners to their organization, by sharing messages of peace and unity on these same communication channels. Not only is the objective to replace the propaganda messages from these terrorist groups, but also to more generally perpetuate an environment of tolerance and understanding amongst youth.

“We wanted people to share when they went against norms, prior beliefs, or seemingly set standards,” said Stephanie Choi, one of the campaign’s architects. “The campaign means showing people that we all have our differences, we all have struggles, we all feel helpless, we all make mistakes and do things that we regret, but we are all capable of changing ourselves for the better and ‘proving the haters wrong.’”

The campaign’s website also offers a list of resources, ranging from information on youth empowerment groups and camps to hotlines for those experiencing tough times, violence or hate victimization.

Stephanie Choi, Trevor Gibson, Sarala Prabhu, and Erika Swanson, the creators of No Hate USA, are all sophomore students at the University of Maryland and interns this semester at START. No Hate USA is part of the Peer 2 Peer (P2P): Challenging Extremism Program established by the U.S. Department of State in competition with other student-developed campaigns.

University of Maryland’s College of Behavior and Social Sciences even tweeted at the campaign, writing “@NoHateUSA We prove the haters wrong by hosting town halls & events where everyone is welcome to discuss pressing social issues #NoHateUSA.”

You can read more about the campaign at (www.NoHateUSA.org) and follow it on Twitter (@NoHateUSA), on Facebook on the No Hate USA page (www.facebook.com/NoHateUSA), and by following the hashtag campaign which utilizes #NoHateUSA.

The Guardian: ‘The Timothy McVeighs are still there’: Fears over extremism in U.S. military
Military.com: A year later, a Guardsman who responded to the Capitol riot recalls delays and uncertainty
NPR: Majority of Americans worry Jan. 6-style attack could happen again, poll finds
END_OF_DOCUMENT_TOKEN_TO_BE_REPLACED

Soldiers of End-Times: Assessing the Military Effectiveness of the Islamic State
END_OF_DOCUMENT_TOKEN_TO_BE_REPLACED