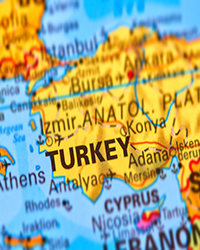 Late Friday evening on July 15, 2016, Turkish soldiers shut down bridges crossing the Bosphorus in Istanbul and flew jets low in the skies over Ankara and other cities. Sonic booms were indistinguishable from explosions throughout the night. The Parliament building, the Türksat telecommunications building, and the headquarters of the police special operations, or the Jandarma, were bombed. Attacks were attempted at the headquarters of the General Staff, the headquarters of Turkish intelligence (MİT), the Presidential Palace, and the hotel where President Erdoğan was staying on the coast in Marmaris, among others – including attacks on the street between soldiers, police, and civilians. Nearly 300 soldiers and civilians lost their lives: 179 civilians, 62 police officers, 24 pro-coup soldiers and five soldiers. The count of wounded is estimated to be between two and three thousand.[1]

Beginning that day and continuing for weeks after, the government made calls to action to citizens to remain vigilant against coup plotters. These calls emanated from mosques and were delivered through nation-wide SMS messages.[2] Initiated by the state and by citizens, this movement to counter the coup has come to be known as demokrasi nöbeti, or the “democracy guard.”[3]

On July 20, 2016, five days after the coup attempt started, under Articles 119 and 120 of the Turkish Constitution, the government issued a decree for olağanüstü hal, or OHAL, putting a state of emergency rule into effect for three months. It also suspended the European Convention on Human Rights. OHAL grants extensive executive powers to the President and Cabinet that reverse the ordinary parliamentary legislative process. Under OHAL, the President proposes legislation for possible approval by the Parliament in the same day. OHAL was to be used in the state’s effort to prevent another coup attempt. Emergency rule curtails citizens’ rights to speech, expression, assembly, mobility, privacy, civic activity, and employment.

In early October 2016, the government extended the state of emergency for another three months.

Some have noted that, viewed from afar, the Turkish government’s epic response to the putsch constitutes a violent overthrow of the military and political order itself.[4] A mass-scale counter-coup response and reorganization of the military and public sector followed the failed coup attempt[5]: 104,914 have been dismissed from their positions in the public or private sector[6]; 50,979 have been detained; and 27,329 have been arrested, including 120 journalists. Convicted prisoners have been released to make room for them in penitentiaries.

From the military: 149 generals, or nearly 46 percent, were discharged, including two four-star generals, nine lieutenant generals, 30 major generals and vice admirals, and 126 brigadier generals and rear admirals; 4,618 military officers were discharged; 8,777 were dismissed from the Ministry of the Interior; and 7,669 were dismissed from the Security General Directorate. These dismissals most severely affected the Turkish Air Force’s combat and tanker pilots, the Special Forces Command, the Land Force’s aviation units and the navy’s headquarters personnel.

Outside of the military, much of the reorganization has occurred in the education sector, but also in health and civil society: 39,448 public servants from the Ministry of Education were dismissed; 5,070 academics were fired; and 1,577 deans were asked to step down. Additionally 1,284 schools, 1,125 associations, 800 dormitories, 129 foundations, 35 hospitals, 15 universities, and 19 trade unions were shut down.

More than 180 media outlets — including media agencies, television channels, newspapers, and magazines — have been shuttered, and online platforms, providers of services[7] and social media accounts were blocked, and the numbers continue to grow. In the media-related public sector positions: 312 were fired from the Turkish Radio and Television Corporation; 196 from the Information and Communication Technologies Authority; 167 from the Ministry of Information, Industry and Technology; 36 from the Turkish Satellite Company (Türksat); and 29 from the Radio and Television Supreme Council.

While the prevention of another coup attempt is the state’s primary objective, the scale of this reorganization is concerning, not just for those who have been arrested, detained, or dismissed, whose families have lost their livelihoods, assets and freedoms of expression, association, and movement. The implications of this response for security in the region are significant. The post-putsch civilianization of the military disrupted a transformation taking place within the military with currently unknown consequences. However, despite numbers being down in the Turkish military, morale is reported to be up, with both new recruits and former veterans returning to participate in Operation Euprates Shield. However, Turkish aerial refueling at İncirlik Base near the border with Syria will continue to be affected until Turkey can train new pilots.

The sheer numbers of the purge have removed a significant number of the positions in Turkish institutions that cooperate with international partners on global security issues; issues as vital as fighting ISIS, managing the refugee crisis from the Syrian civil war, and maintaining regional security under the NATO treaty alliance.

In addition to this restructuring, the continuation of OHAL leaves the constitutional structure and rule-of-law in Turkey in a state of uncertainty and subject to the will of the executive.[8]  In this sense, the counter-coup actions are at least in part a continuation of a longer trend that has used the power of the state itself to dominate political opposition, public service, and the public sphere, weakening democracy. This trend escalated after the 2013 leaking of evidence of corruption implicating Erdoğan and other high-ranking members within the AKP. However, a growing body of circumstantial evidence has created an overall consensus that Fethullah Gülen and his followers,[9] now known as the Fethullah Gülen Terrorist Organization, or FETÖ, ordered the attempt to overthrow the Turkish government.

This consensus, combined with the current political climate, has created an atmosphere of political tension in which no one is allowed to question government actions without enduring accusations. The presumption of innocence does not adequately protect citizens or their associates from accusations in the modern trial by media environment in post-putsch, emergency-rule Turkey. To question is to risk being perceived as an uninformed outsider at best, an apologist for the FETÖ terrorist group, or at worst, traitorous. In fear of another attempt to overthrow the state, any opposition to the government is now equivalent to questioning the democratic constitutional order of Turkey itself.

For decades, Turkey has been, and remains to be, one of the most important allies for the United States in the region. An earthquake shook Turkey on the night of July 15, 2016. The fissure remains, the aftershocks are not over, and the implications are imperative to understand for regional security in the Middle East, and in particular to understand those with who we partner to stop terrorism.

[1] A detailed description of events as they unfolded on the night of the coup is available here.

[2] A nationwide text message from President Recep Tayyip Erdoğan, 21 July 2016, read: “My saintly nation; do not abandon the heroic resistance you have put up for your country, homeland, and flag. To teach the traitor, the terrorist (FETÖ) a lesson, continue your resistance and duty to guard democracy. The owners of our squares are not tanks, but the people.” Repeated calls to action like this one mobilized the democracy guard.

[3] Public opinion polls, for example this survey of Turkish demokrasi nöbeti participants, shows that mobilization against the coup did not just come from the AKP’s supporters, and that the call to guard democracy has increased popular support for the AKP government, slightly.

[4] A former diplomat stated this at a panel at the Middle East Institute’s 7th Annual Turkey Conference, Washington, DC, September 30, 2016.

[5] Unless otherwise noted, these numbers are from the Official Gazette of the State of Emergency Decrees 677 (issued July 23) and 672 (issued September 1), and a site tracking academics, and a website that aggregates these numbers.

[7] Most recently Dropbox, Google Drive, and Microsoft OneDrive were blocked.

[8] Though the public has continually opposed strengthening the executive branch in Turkey, a constitutional referendum to strengthen presidential powers, something Erdoğan and the AKP have been trying to pass since 2009, might succeed if negotiated as the amendment would not have to be put to referendum under OHAL.

[9] Who is Gülen, and what is his relationship with the current party in power, the AKP? Fethullah Gülen is an imam, who has lived self-exiled in the United States for decades, and his religious organization, the Hizmet (Service) movement, has millions of followers in Turkey known locally as cemaat (community). His organization spreads throughout the world, from the United States, to Africa and Central Asia. Due to the international orientation and emphasis on education within the Gülenist movement, many of those within it had relationships that formed a portion of Turkey’s international relationships. The ruling AK party and Gulen’s organization branch from separate lineages of Hanefi Sunni Islam, and have millions of religious supporters within the general population – who at one time, before 2013, often supported both the organization and the party. The AKP and cemaat have overlapped and cooperated. The AKP called Gülen’s structure a parallel state: each had associated supporters or members at all levels and branches of state institutions, in media outlets, in civil society organizations, and in law enforcement.