Terrorist attacks in the United States between 2010 and 2016 were typically carried out by individual perpetrators who were only loosely linked to a specific organization or ideological movement, according to a new report from the National Consortium for the Study of Terrorism and Responses to Terrorism (START), a Department of Homeland Security Center of Excellence led by the University of Maryland. Based on analysis from START’s Global Terrorism Database (GTD), the report categorizes the 2,794 terrorist attacks and 3,659 resulting deaths in the United States from 1970-2016 by the ideology of the attacker(s) and explains the ideological patterns of these attacks by decade. 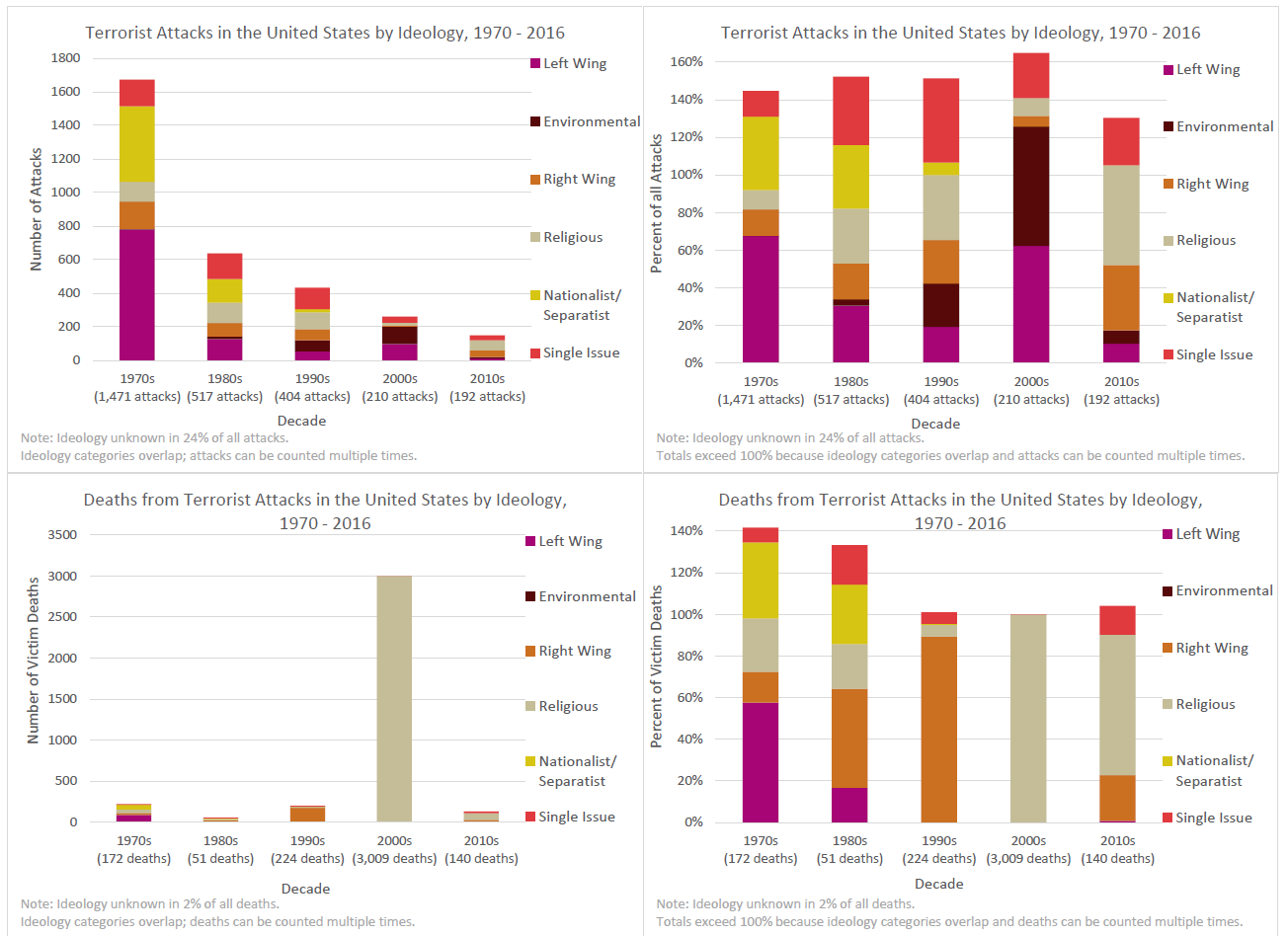 Ideology is known for 76 percent of the attacks in the United States and one-third (33%) of those attacks were classified as having been motivated by more than one type of ideology. The classification of terrorist attacks by ideology does not characterize an entire population or ideological movement as violent or predisposed to use terrorist tactics to advance ideological beliefs.

“This analysis illustrates the scope and evolution of terrorist violence in the United States,” said Dr. Erin Miller, program manager of the GTD and author of the report. “It’s important to understand that terrorism is just one type of violence, even within the broader landscape of ideologically motivated attacks. So this report is not intended to be a comprehensive threat assessment or to characterize the behavior of entire ideological movements.”

In comparison to the 2000s, there was a sharp decline in the proportion of terrorist attacks carried out by left-wing, environmentalist extremists during the first seven years of the 2010s (from 64% to 12%). At the same time, there was a sharp increase in the proportion of attacks carried out by right-wing extremists (from 6% to 35%) and religious extremists (from 9% to 53%) in the United States.

The lethality of terrorism in the United States between 1970 and 2016 was characterized by thousands of non-lethal attacks (91%) that were punctuated by relatively rare but deadly, or even exceptionally deadly, attacks. More than four-fifths (82%) of the people killed in terrorist attacks in the United States during this time period died as a result of the September 11, 2001 attacks in New York, Pennsylvania and Virginia. Additionally, 5 percent of deaths resulted from the 1995 bombing of the Alfred P. Murrah Federal Building in Oklahoma City, Oklahoma.

The overall lethality of terrorist attacks that took place between 2010 and 2016 was lower than in the previous two decades; however, this time period was marked with several mass-casualty attacks that influenced trends. For example, of the 68 people killed in attacks carried out by jihadi-inspired extremists during this period, 49 died in Orlando, Florida as a result of a 2016 armed assault carried out by Omar Mateen. Fourteen others died in San Bernardino, California in a 2015 attack by Syed Farook and Tashfeen Malik. Likewise, nine of the 18 people killed by white supremacists or white nationalists died as a result of Dylann Roof’s 2015 attack at Emanuel African Methodist Episcopal Church in Charleston, South Carolina. Six others were killed when Wade Michael Page attacked worshippers at a Sikh temple in Oak Creek, Wisconsin.

“This report illustrates how overall trends in terrorism in the United States with respect to ideology are highly sensitive to the influence of individual mass-casualty attacks,” Miller said.

The report also expands on ideological trends within and among decades. Some key points from previous decades include:

For media inquiries, contact Jessica Stark Rivinius at 301-405-6632 or rivinius@start.umd.edu.