From professional medical photographer to social scientist, professor and Director of Graduate Studies, Dr. Laura Dugan has had a very diverse career path.

As a teenager, Dugan dreamed of being a professional photographer. It was her high school art teacher’s impact that influenced her to pursue her interest in photography in college.

Initially, Dugan received her bachelor’s degree in Fine Arts and worked as a medical photographer at Children’s Hospital in Pittsburgh. While working in the media department for five years, Dugan was responsible for photographing surgeries, documenting injuries, taking portraits, and recording hospital events.  In one instance, she was responsible for documenting the unwrapping of the bandages for a girl whose foot was run over by a train. 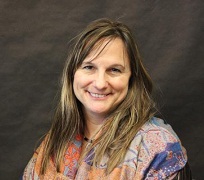 “It was that moment that I appreciated how well controlled and clean regular surgeries are. I think I still have a slide of that foot in a portfolio somewhere,” Dugan said.

Dugan then made a major shift in her career path when she quit her job as a photographer and pursued a master’s degree from Carnegie Mellon University in Public Management and Policy.  Two years later she entered the doctoral program in Public Policy and a year after that, she pursued a master’s degree in statistics. Despite her love of photography, her talent and passion for math and statistics led her to pursue a career as a social scientist.

Upon receiving her doctorate in Public Policy in 1999, Dugan became an assistant professor of Criminal Justice at Georgia State University and then she moved to the Criminology and Criminal Justice Department at the University of Maryland. Her expertise was in studying intimate partner violence but after years of intense focus on that topic, the stories describing acts of violence that partners committed against one another became burdensome.

Dugan began working on a crucial “side project” with a criminologist colleague, Gary LaFree. The side project was the construction of START’s Global Terrorism Database (GTD), now START’s flagship dataset and research project. Today the database contains information on more than 113,000 terrorist events.

Also at START, alongside Erica Chenoweth, Dugan is the co-principal investigator of the Government Actions in Terror Environments (GATE) project. GATE identifies behaviors including but not limited to counterterrorism tactics that governments direct toward terrorist organizations and their constituencies, ranging from violent acts intended to punish those organizations to conciliatory acts intended to address grievances. While most current research evaluates the effects of the most salient and usually repressive actions, the GATE project collects data on all government actions—including more subtle repressive or conciliatory actions—that were initiated by governments in select countries from 1987 to the present.

Dugan and the GATE team identify who did what to whom, and estimate the effects of government actions on terrorist outcomes. GATE includes data on government action in a variety of nations such as Israel, Lebanon and Sri Lanka; and her team has also taken on the arduous task of gathering data on relevant actions taken by the United States federal government.

“It is especially challenging to collect GATE data in the United States because instead of having one primary terrorist threat, there are several sources of threat that could be triggered by a wide range of actions by the U.S. government,” Dugan said.  “It could be a new government stance on gay marriage or actions overseas.”

After more than 13 years of studying terrorism, Dugan is convinced that the United States must adapt advanced technology so that law enforcement can process information faster allowing them to identify and apprehend perpetrators sooner. She also argues that law enforcement and policy makers should identify the constituencies of terrorist organizations and listen to their grievances.  By treating constituencies better, the terrorist organizations have less recruiting power than when the government acts repressively.

“Regular people generally have no interest in fighting and want to live their lives more happily,” she said.

Dugan serves as the Director of Graduate Studies in the top-ranked University of Maryland’s Criminology and Criminal Justice Department. She said she takes pride in pairing her graduate students with opportunities to advance their learning and research skills.

She also has been teaching graduate statistics courses in that department since 2001, and happily declares that she still finds it rewarding.

“I always love seeing students demonstrate what they have learned in their final papers,” Dugan said. “I look forward to it each year. A majority of students enter the class with a fear of statistics and leave with a strong grasp of the material and ability to apply each concept.”

Dugan will also teach Crime and Delinquency Prevention in the Fall of 2014 and continue working on GATE and other terrorism projects.