A group of START interns recently attended a policy roundtable led by British Ambassador to the United States, Kim Darroch, in which the ambassador spoke on a variety of topics ranging from current events in Iran to social media as a recruitment tactic. Students were given the opportunity to ask questions and interact with the ambassador. 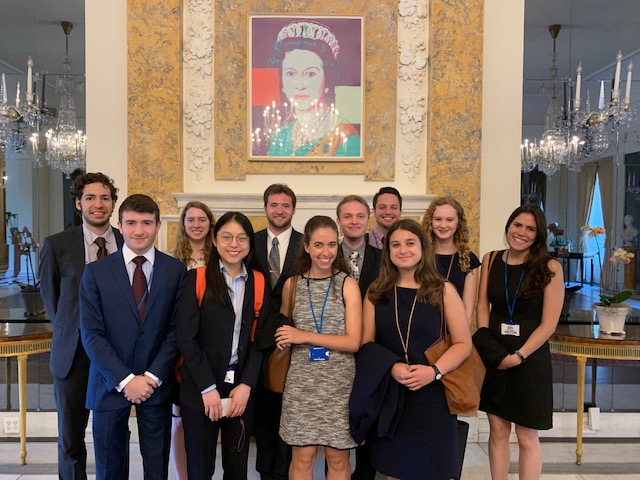 “It was an incredible opportunity for our students to speak to someone who is playing such an important role in international security matters and the fight against terrorism,” said Eva Coll, START’s experiential education coordinator. “We are grateful to our colleagues at the British Embassy.”

Darroch’s diplomatic career spans three decades and has been primarily focused on national security issues and European Union policy. Darroch served as the Prime Minister’s National Security Advisor, from January 2012 to September 2015 acting as Secretary of the National Security Council and leading the National Security Team on issues such as the rise of Daesh in Iraq and Syria, Russian aggression in Ukraine, the nuclear threat from Iran and the collapse of government authority in Libya.

The students also toured the embassy and residence, a historic building in the Embassy Row neighborhood of Washington, D.C.

“From the outside, you’re on Massachusetts Avenue, in D.C., then you walk inside and you’re transported to the middle of Britain,” Coll said.