START interns are getting active, rain or shine 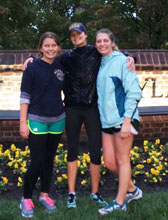 All work and no play makes for some pretty dull START interns. Just ask Benjamin Ash, one of several interns who have started a fitness group this semester.

The idea to start an exercise group for the interns came from Ash and two colleagues, Rachel Schott and Ben Jubar. While interning together over the summer, the three decided to sign up for a Tough Mudder in 2015. Ash, who has previously participated in a Tough Mudder event, knew it would be wise to start training now.

Currently the group runs together in the morning, and some members run again with another group in the afternoon.

“We are currently focusing on running, be it around campus or down the Anacostia Trail and around Lake Artemesia,” Ash said. “We also add in some more strength training and cardio workouts, such as running all the steps at Cole Field House.”

The group is even planning a run through Washington, D.C., both as a workout and sightseeing trip, and a visit to Old Rag Mountain in Shenandoah National Park for a hike.

Group training is something Ash says is essential for a Tough Mudder. Having a group builds the trust and connection needed to finish the course.

“We all know each other much better now,” Ash says. “Even when the internships end or we branch out into other careers, we’ll have the connections we made here to keep us all motivated.”

As the weather begins to change, Ash and his comrades recognize just how difficult their training will become. When faced with the cold, Ash remembers something his uncle, who is a Marine, used to tell him: “Pain is weakness leaving the body.”

“We’re meeting the challenge head on and as a team, so it’s not nearly as hard to get up each day, regardless of weather,” Ash said. “Today, for example, it was cold and raining the entire run. We still had full attendance and did more than four miles without a single person complaining.”

Ash says the motivation, whether it’s in or out of the office, is what sets interns at START apart from people at other places he’s worked at.

“For me, the ability to say ‘I work at START’ hasn’t stopped bringing a smile to my face and filling me with pride,” Ash said. “Explaining the acronym is another story, but I’ll welcome that trade-off.”