Historically, as fuel prices increase, the profitability of fuel theft has drawn competing cartels into direct conflict over territory, pipeline access (to illegally tap and divert), trafficking routes, and shares of the black-market fuel economy.

At least 22 of Mexico’s 32 states deal with fuel theft to varying degrees with the highest concentration in the states of Hidalgo, Puebla, Querétaro, Jalisco, Veracruz, México, Tamaulipas and Guanajuato. In Guanajuato, the homicide rate has nearly tripled in recent years as the Jalisco Nueva Generación Cartel (Jalisco New Generation Cartel [CJNG]) and Cártel de Santa Rosa Lima (CSRL) battle for control of the illicit fuel trade. While CSRL is not widely known, it is a criminal organization that fragmented from CJNG, and its primary criminal activity is fuel theft. CSRL’s specialization has made it one of the top fuel-theft criminal organizations in Mexico. 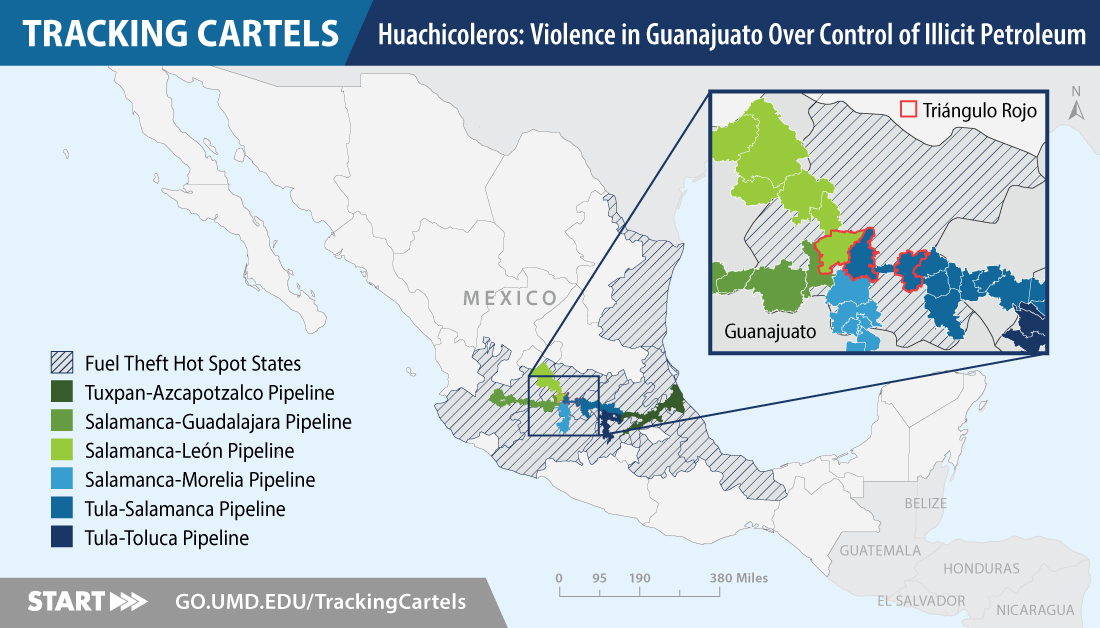 In 2017, CSRL directly challenged CJNG’s dominance of fuel theft in Guanajuato starting a territorial war over some of the most profitable fuel theft territories in Mexico. In Guanajuato, the municipalities of Salamanca, Iraputo, and Celaya, known as the second Triángulo Rojo (Red Triangle) and the ‘Triángulo de las Bermudas’ (Bermuda Triangle) of fuel theft (the first being in Puebla), house a major PEMEX refinery and multiple storage and distribution terminals. It is here that CJNG and CRSL exercise extreme levels of violence and corruption to protect and expand their illicit fuel theft economies.

Fuel theft is complex and dangerous. It has increasingly evolved into a diverse range of criminal activities. Traditionally, fuel theft in Mexico involves exploiting existing infrastructure by illegally tapping pipelines to siphon fuel. The Gulf Cartel and their rival Los Zetas first began illegally tapping pipelines in the early 2000s taking advantage of PEMEX pipelines located in their operational zones, where a large percentage of Mexico’s oil and natural gas reserves exist. The process of illegally tapping pipelines is highly dangerous and resulting large explosions often fill headlines in Mexican media. Still, illegal tapping is one of the key strategies employed by cartels and criminal organizations with more than 15,000 identified illegal taps in 2018.

Over time, fuel theft has become more sophisticated as profits beget more capital investment in the process. Cartels and criminal organizations can now construct alternative distribution mechanisms (e.g., alt-pipelines) from pipelines to siphon fuel. Of course this takes further financial capital to accomplish, but more importantly, it takes specialized knowledge. To exploit specialized knowledge, cartels and criminal organizations infiltrate refineries, processing facilities, and distribution centers, gaining critical information through bribery, threat, and extortion. PEMEX employees, like technicians and refinery workers, are often threatened into providing information on where to hijack oil tankers or how to access underground pipelines. It should be noted that cartels and criminal organizations do not have to exercise violence to steal fuel. Numerous sources have leveed accusations of corruption within PEMEX as evidence of bribery and collusion grows, including corruption charges filed against former PEMEX CEO Emilio Lozoya.

Currently, the Geospatial Research Unit (GRU) at the National Consortium for the Study of Terrorism and Responses to Terrorism (START) is leading a joint research project with partnering DHS Centers of Excellence, the Criminal Investigations and Network Analysis Center (CINA) and the Center for Acceleration Operational Efficiency (CAOE), to develop a multi-pronged approach to triangulate open source information about transnational criminal organizations (TCOs), including major Cartels and gangs (e.g. MS-13), operating in Mexico and the Northern Triangle. The purpose is to use open-source information to build a holistic and accurate understanding of TCOs’ activities in Mexico and the Northern Triangle for analyses and operational decision-making. The effort is a Joint Centers of Excellence project supported by the DHS Office of University Programs.