There is no greater example of the changing dynamics of the transnational criminal organization (TCO) activity and violence in Mexico than the Jalisco Nueva Generación Cartel (Jalisco New Generation Cartel [CJNG]). Rising from the ashes of the once powerful Milenio Cartel, CJNG is the epitome of a ‘modern’ TCO, swiftly and violently rising to become one of the most powerful TCOs in Mexico and the world. CJNG is an organized criminal security threat unlike others experienced before. CJNG is known for its brutality and violence, spectacular displays of narco-messaging (propaganda, notices, and threats), social media savvy, quasi-military tactics, diverse knowledge base, ‘orphan’ criminal cell integration, and efficacious narco-trafficking strategies. The violent rise of CJNG not only has considerable security implications within Mexico, but offers a significant security challenge to the region, and world.

CJNG has successfully challenged traditional arrangements of narco-trafficking throughout Mexico. They consolidated enough power and profits to confront other major cartels and the Mexican state with high levels of impunity. As CJNG continues to consolidate power and capture more profit, it can, and will leverage its power violently to disrupt and seize a greater share of regional and global illicit markets. CJNG is well situated to displace Colombian Cartels as primary suppliers of cocaine and positioned to disrupt and coop the Sinaloa Federation supply chains of methamphetamine, heroin, fentanyl, and marijuana into the United States, and abroad. Moreover, CJNG’s diversifying criminal portfolio into extortion, money laundering, kidnapping, petroleum theft (huachicol), and human trafficking makes it more agile and adaptable, even as its size and strength grows.

CJNG’s founding marks the genesis of a confluence of factors reshaping TCOs, clandestine economies, narco-trafficking, and law enforcement in the Mexican War on Drugs. The group emerged from the collapse and fragmentation of the Milenio Cartel and quickly evolved to dominate TCO related activity and violence over the last decade. Originally known as the “Matazetas” (Zetas Killers), CJNG made its first appearance in 2009 when the mutilated bodies of three men were found inside a van in Cancún, Quintana Roo with the following narco-message:

“We are the new group Mata Zetas (Zeta Killers) and we are against kidnapping and extortion, and we will fight them in all states for a cleaner Mexico— Los Mata Zetas”

CJNG, as CJNG, debuted in September 2011 employing a narco-message that displayed the bodies of 35 alleged members of Los Zetas in Boca del Río, Veracruz—the Veracruz Massacre—announcing their arrival and intent to “cleanse the state” and restore law and order. This tactic repeated itself in varied scales of violence and death in states across Mexico, from Jalisco to Colima and Guanajuato to Michoacán. Effectively, CJNG declared war on all other major cartels in Mexico including the Sinaloa Federation, considered to be their most significant power rival in 2014, and successfully carved out a new space for its unique criminal operational strategy. CJNG is operationally present in 23 of Mexico’s 32 states (although has allies in all 32 states) and continues to be led by founder Nemesio Oseguera Cervantes, alias “El Mencho”. El Mencho is the DEA’s most wanted fugitive; they offer their largest reward ever ($10 million) for information leading to his arrest.

There is no greater evidence of the adaptability, agility, and resilience of CJNG than its rapid geographical spread throughout Mexico. The geographic expansion of CJNG follows a specific spatial logic to ensure maximum profitability. CJNG has captured the key ports of Veracruz, Mazanillo, and Lázaro Cardenas in the Gulf and Pacific that allows them to assert control of and consolidate key components (e.g. precursor chemicals) of global illicit goods supply chains.

CJNG continues to battle the Sinaloa Federation for control over Ciudad Juarez and Tijuana, two key smuggling points of entry into the U.S. and their trafficking routes through Baja California, Sonora, Sinaloa, and Chihuahua. It has battled and largely defeated Los Zetas and Gulf Cartel factions in central Mexico where large swaths of production territory and key trafficking routes intersect in Jalisco, Guanajuato, and Michoacán. They have even expanded to the southwest edges of Quintana Roo and Chiapas, states that were once free from cartel presence but are now seminal territories in narcotic flows from the rest of Latin America. As CJNG’s geographical expansion develops its strength and power simultaneously grows.

CJNG’s successful criminal operational strategy depends upon a range of novel collaborative tactics, exercises of violence, and diversification of criminal activity. CJNG has adopted and adapted a range of raw materials, manpower, criminal organizational strategy expertise from past networks to fuse various past cartels’ strengths. While CJNG continues to contend with competing major cartels like the Sinaloa Federation and its own fragmentation (e.g. Nueva Plaza Cartel), it continues to be one of the greatest security threats in the current organized crime landscape today. Overall, it is indisputable that CJNG has become one of the most prolific and violent TCOs in the world. 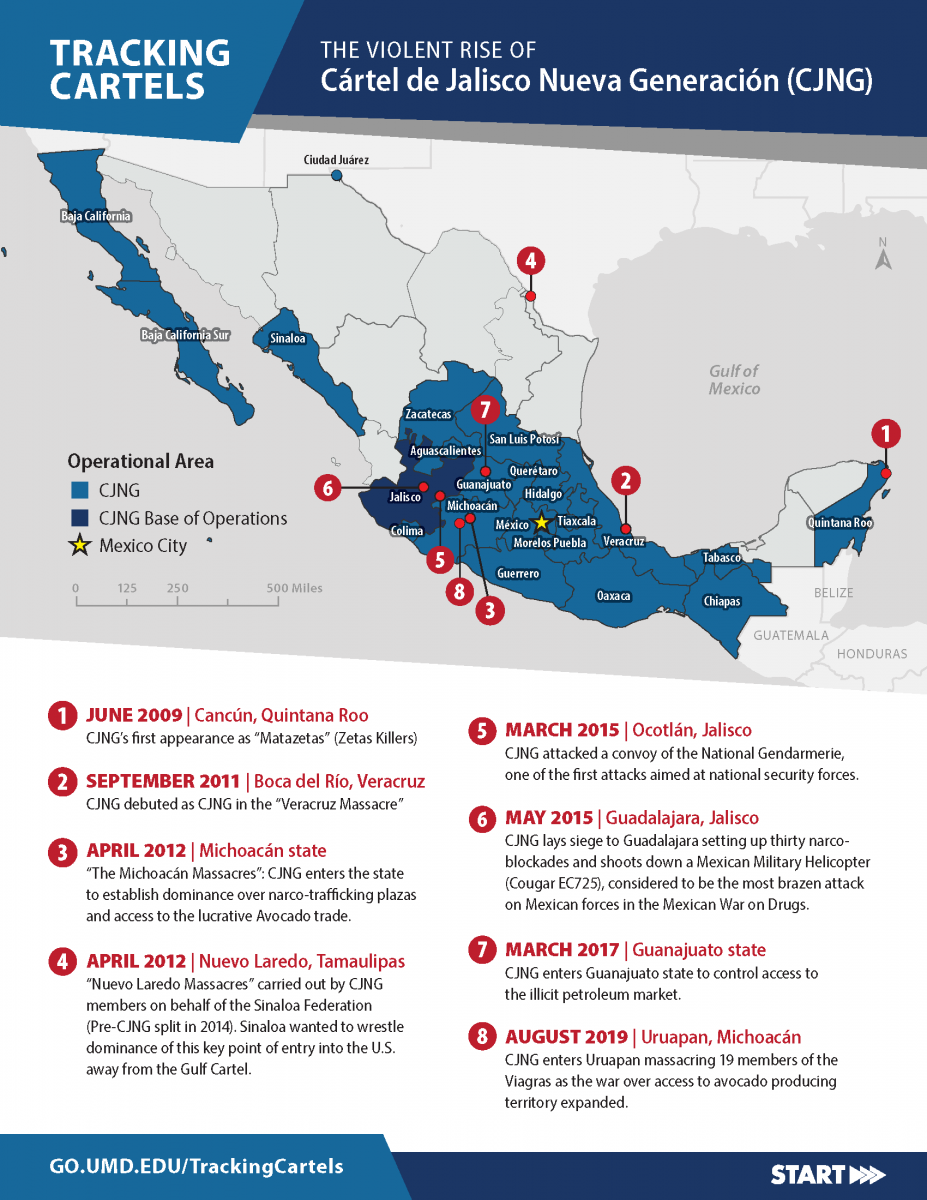 Currently, the Geospatial Research Unit (GRU) at the National Consortium for the Study of Terrorism and Responses to Terrorism (START) is leading a joint research project with partnering DHS Centers of Excellence, the Criminal Investigations and Network Analysis Center (CINA) and the Center for Acceleration Operational Efficiency (CAOE), to develop a multi-pronged approach to triangulate open source information about TCOs, including major Cartels and gangs (e.g. MS-13), operating in Mexico and the Northern Triangle. The purpose is to use open-source information to build a holistic and accurate understanding of TCOs’ activities in Mexico and the Northern Triangle for analyses and operational decision-making. The effort is a Joint Centers of Excellence project supported by the DHS Office of University Programs.