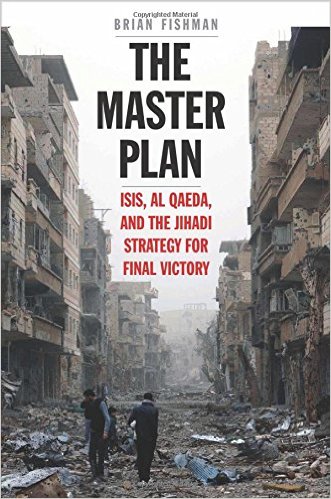 On Monday, November 14 from 3:00 to 4:00 pm, Brian Fishman will give a lecture on his new publication "The Master Plan: ISIS, al-Qaeda, and the Jihadi Strategy for Final Victory" at START headquarters. The event is free and open to the public, but RSVP's are appreciated.

Given how quickly its operations have achieved global impact, it may seem that the Islamic State materialized suddenly. In fact, al-Qaeda’s operations chief, Sayf al-Adl, devised a seven-stage plan for jihadis to conquer the world by 2020 that included reestablishing the Caliphate in Syria between 2013 and 2016. Despite a massive schism between the Islamic State and al-Qaeda, al-Adl’s plan has proved remarkably prescient. In summer 2014, ISIS declared itself the Caliphate after capturing Mosul, Iraq—part of stage five in al-Adl’s plan. Drawing on large troves of recently declassified documents captured from the Islamic State and its predecessors, counterterrorism expert Brian Fishman tells the story of this organization’s complex and largely hidden past—and what the master plan suggests about its future. Only by understanding the Islamic State’s full history—and the strategy that drove it—can we understand the contradictions that may ultimately tear it apart.

Brian Fishman is a counterterrorism research fellow at New America, a Fellow with the Combating Terrorism Center (CTC) at West Point, and Philanthropic Engineer with Palantir Technologies. He previously served as the CTC’s Director of Research and was a professor in the Department of Social Sciences at West Point. Fishman is the author of a number of studies on terrorism and al-Qaeda, including seminal investigations of al-Qaeda's foreign fighters in Iraq and Iranian support for Shia militias fighting U.S. troops in Iraq. Fault Lines in Global Jihad: Organizational, Strategic, and Ideological Fissures, a volume he co-edited with Assaf Moghadam, was named one of the top books for understanding terrorist recruitment in Perspectives on Terrorism. Fishman is a term member of the Council on Foreign Relations and was a founding editor of the CTC Sentinel. He has taught as an adjunct professor in Georgetown's School of Foreign Service and Columbia's School of International and Public Affairs. Before joining the CTC, Fishman was the Foreign Affairs/Defense Legislative Assistant for Congresswoman Lynn Woolsey. Fishman holds a Masters in International Affairs (MIA) from Columbia University and a B.A. from the University of California Los Angeles.​

The Conversation: As states reopen, tensions flare between the rule followers and rule breakers
Business Insider: Why anti-lockdown protests are a 'magnet' for white supremacists and far-right extremists
Vox: Media coverage has blown anti-lockdown protests out of proportion
END_OF_DOCUMENT_TOKEN_TO_BE_REPLACED