On Thursday, June 25 at 11:30 a.m., START will host Philip Mudd, former deputy director of the CIA Counterterrorist Center and FBI National Security Branch. Mudd will be discussing his book, The HEAD Game: High-Efficiency Analytic Decision-Making and the Art of Solving Complex Problems Quickly. The event is free and open to the public, but guests must RSVP by COB Wednesday, June 24.

Philip Mudd joined the Central Intelligence Agency in 1985 as an analyst specializing in South Asia and then the Middle East. He began work in the CIA’s Counterterrorist Center in 1992 and then served on the National Intelligence Council as the Deputy National Intelligence Officer for the Near East and South Asia (1995-98). After a tour as an executive assistant in the front office of the Agency’s analytic arm, Mr. Mudd went on to manage Iraq analysis at the CIA (1999-2001). Mr. Mudd began a policy assignment at the White House in early 2001, detailed from CIA to serve as the Director for Gulf Affairs on the White House National Security Council. He left after the September 11 attacks for a short assignment as the CIA member of the small diplomatic team that helped piece together a new government for Afghanistan, and he returned to CIA in early 2002 to become second-in-charge of counterterrorism analysis in the Counterterrorist Center. He was promoted to the position of Deputy Director of the Center in 2003 and served there until 2005. At the establishment of the Federal Bureau of Investigation’s National Security Branch in 2005, FBI Director Mueller appointed Mr. Mudd to serve as the Branch’s first-ever deputy director. He later became the FBI’s Senior Intelligence Adviser. Mr. Mudd resigned from government service in March 2010. 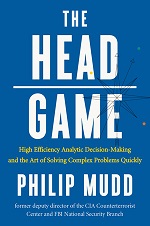 Mr. Mudd is currently the President of Mudd Management, a company specializing in security consulting; analytic training; and public speaking about security issues.  He is a senior fellow at the New America Foundation and The George Washington University’s Homeland Security Policy Institute.  He now serves as Senior Global Adviser to Oxford Analytica, a British-based firm specializing in advising multinational companies. He sits on the advisory board for the National Counterterrorism Center and for the Director of National Intelligence, and he serves on the Aspen Institute’s Homeland Security Group.

The HEAD Game describes Mudd's approach to complex decisions using a five-step methodology, providing readers with a battle-tested set of guiding principles that promise to bring order to even the most chaotic problems.