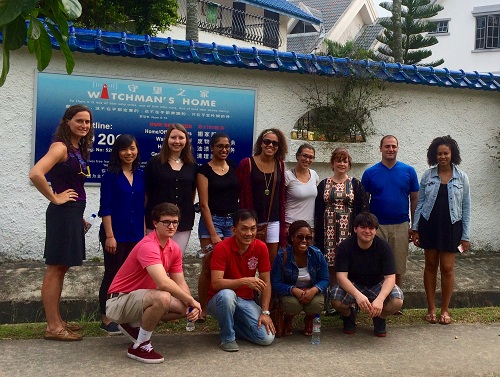 A band of students and staff from START recently took an old adage to heart when they boarded a plane for Southeast Asia and set their feet down to walk a mile – or 100 – in someone else’s figurative shoes. Led by Dr. Kate Izsak and Marcella Morris, 10 students traveled for more than 24 hours to participate in a five-day workshop on countering violent extremism with the International Centre for Political Violence and Terrorism Research (ICPVTR) at Nanyang Technological University (NTU) in Singapore. By the end of the workshop, the delegation logged 100 miles traversing Singapore’s CVE landscape.

Organized by Dr. Rohan Gunaratna, head of ICPVTR, the workshop did more than just focus on CVE efforts, it explored various modes of rehabilitation and offered students the unique experience to visit the Religious Rehabilitation Group’s (RRG) Resource and Counselling Centre that counsels terrorist detainees in Singapore. They also visited the Watchman’s Home, a private organization where residents are prepared for a new lease on life through social, spiritual and work therapy as they are reintegrated on society.

These visits left a lasting impressions on the students and perhaps, tweaked a few career goals.

“Visiting the rehabilitation facilities gave me a greater appreciation for how intensive Singapore’s CVE and counterterrorism programs are,” said Erika Swanson, START student and CVE Fellow. “Now that I’ve seen how rehabilitative Singapore is even with those who haven’t committed serious and violent crimes, I recognize that the U.S. could definitely serve to adopt more of those types of programs.”

Swanson hopes to be one of those people who implement rehabilitation programs in the future.

The students also got a firsthand experience in a workshop which included touring the training facilities for Singapore’s frontline law enforcement personnel. The workshop further detailed the drivers of terrorism and extremism, and its discussions centered on best practices in ongoing strategies to counter violent extremism.

“I think our students were particularly struck by the degree to which counterterrorism policies are integrated into daily life in Singapore.  For instance, they were fascinated to learn that Singapore does not allow gas stations within the dense, inner areas of the city, because of their ability to amplify the consequences of an attack,” said Izsak, START Education Director and Director of the University of Maryland’s Program in Terrorism Studies.

“Our students had the opportunity to study a government that interacts with its citizens in new and different ways, which allowed them to consider what that means for how the nation approaches terrorism,” Izsak said.

Despite the thorough workshop agenda, the START group also had the opportunity to enjoy some of Singapore’s most unique and thrilling aspects. They swam with dolphins, took a night safari, and immersed themselves in the storied zoo.

“Singapore’s zoo is very open and designed to be a great experience for the animals, to the point where they had the orangutans in an open enclosure and there was nothing between us and some of the animals, including the koalas and kangaroos,” Swanson said. “As a person who loves animals and zoos, this was one of the best experiences I’ve ever had.”

The students also lauded the hospitality of their hosts and spoke of delicious meals with dialogue that was never dull.

“The workshops and cultural pieces were perfectly thought out as if it was designed just for our students,” said Marcella Morris, START’s Education Coordinator. “NTU did a remarkable job making our group feel both welcomed and encouraged to explore. The students most appreciated their candor and availability to answer topical research and cultural questions at the same time.”

“Given the success of this program, we hope to be able to offer it again next summer, in addition to finding other ways to build upon the exchange between our two institutions,” Izsak said.

The International Centre for Political Violence and Terrorism Research (ICPVTR) is a specialist centre within the S. Rajaratnam School of International Studies (RSIS) at Nanyang Technological University, Singapore. ICPVTR conducts research, training, and outreach programs aimed at reducing the threat of politically motivated violence and at mitigating its effects on the international system. The START-ICPVTR partnership includes developing tools to measure radicalization and deradicalization both in custodial and community settings. Using the radicalization index, START-ICPVTR analysts interviewed terrorist inmates and detainees to ascertain their changing attitudes and opinions.