Another Look at Jujitsu Politics

Clark McCauley and Sophia Moskalenko are co-authors of Friction: How Conflict Radicalizes Them and Us, Revised and Expanded Edition, which will be published by Oxford University Press in January, 2017.  This Discussion Point is adapted from Chapter 17.​ 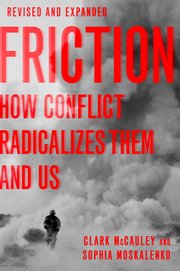 We write this Discussion Point on July 25, 2016, in the shadow of a week of violence in Europe.  After the attack in Nice, there have been three brutal attacks in Germany: the train attack in Wurzburg by an immigrant from Afghanistan, the killing of a woman by a Syrian refugee in Reutlingen, and a suicide-bombing in Ansbach by a Syrian refugee whose application for asylum had been rejected. It is not yet clear whether the German attacks were motivated by politics—in perceived defense of Islam—or by mental health and other personal problems.

In any case, these relentless reminders of jihadi terrorism, amplified by social media, are echoed in politicians’ rhetoric about winning the war on terrorism. Here we consider potential consequences of the more inflammatory rhetoric that uses terrorism as an argument for greater exclusion of Muslims from the West. We ask why the Islamic State is eager to support and claim attacks in Europe, and why the IS strategy is so powerful yet so hard to see.

Jujitsu Politics in the Paris Attacks

On November 13, 2015 in Paris seven attackers killed 130 and wounded 358. The attacks were organized and claimed by Islamic State. Why would a group aiming for a Sunni state in Syria and Iraq—a group already under attack by the armed forces of Syria, the United States, the United Kingdom, France, and Russia—commit resources for a terrorist attack in Paris?

Every terrorist attack is a com­munication to multiple audiences. To see what IS is up to we need to look at these audiences separately.

For Muslims in Europe there is also a message of power, but more important there is jujitsu politics— IS trying to use Western strength against the West. With jujitsu politics terrorists aim to elicit an overre­action that mobilizes new sympathy and support for themselves. A response to terror­ism that creates collateral damage, that harms individuals previously unsympathetic to the terrorists, can bring new status and new volun­teers for the terrorists.

This is the result IS seeks in France and in Europe more generally. It hopes for government reaction that will target Muslims with new re­strictions and new surveillance. It hopes also for a public reaction against Muslims, including increased discrimination and hostility targeting Muslims. It would like to see a strengthening of anti-immigrant political parties not only in France but in other European countries. In short, IS looks for European reactions to push European Muslims toward giving up on Europe and joining in the construction of a new caliphate.

Responding to the attacks, the French parliament decreed a state of emergency: “All over France, from Toulouse in the south to Paris and beyond, the police have been breaking down doors, conducting searches without warrants, aggressively questioning residents, hauling suspects to police stations and putting others under house arrest.”[1] The targets of this escalated policing are predominantly Muslims, giving IS the ju­jitsu politics it hopes will convince Muslims all over Europe— 19 million Muslims in the European Union— that they have no future in Europe.

Perhaps the most dangerous force for hostility and discrimina­tion against Muslims is the definition of the enemy as “fundamentalist Muslims.” Marine Le Pen, leader of an anti-immigrant party in France, offered this target in an interview with NPR’s Robert Siegel: “We must eradicate Islamic fundamentalism from our soil.”[2] Siegel did not chal­lenge Le Pen’s definition of the problem. But the fact is that the great majority of Islamic fundamentalists are devout rather than political.

Defining religious ideas and religious practice as the enemy will target hundreds or thousands for every jihadist or jihadist sympathizer reached. Jujitsu poli­tics will be winning.

Why Is Government Overreaction so Easy to Elicit?

France watched as the U.S. response to the 9/ 11 attacks took the United States into Afghanistan and Iraq. It is fair to ask, why does France fall so easily to a new round of jujitsu politics?

In our book Friction (2011) we asked this question as we described jujitsu politics as a mechanism of radicalization. We suggested a few possible answers, one of which invoked the power of anger. In the second edition of Friction (November 2016), we build on this suggestion to argue that terrorists depend more on anger than fear.

There is evidence that anger is indeed the dominant reaction to terrorist attack. An innovative study by Back, Kufner, and Eglof examined emotion words in millions of words of texts sent in the United States on September 11, 2001. Anger- related words increased throughout the day, ending six times higher than fear- and sadness- related words.[3]

In addition, experiments have found that U.S. students responding to images of the 9/ 11 attacks with anger are more likely to favor aggressive reactions to terrorism, whereas reactions of fear and sadness are related to support for more defensive reactions.[4] Anger reactions were related to support for attacking terrorist leaders in foreign countries, support for war against countries harboring terror­ists, and out- group derogation of Arab Americans and Palestinians. In other studies fear reactions were associated with increased support for government surveillance and restriction of civil liberties.[5]

In short, the predominant U.S. reaction to the 9/ 11 attacks was not fear but anger. The action tendency associated with anger is retribution; thus, anger in response to a terrorist attack is associated with aggression and out- group derogation. On the other hand, fear is associated with defensive strategies of surveillance and curtailed civil rights. Fear brings costly defensive tactics, but anger is the emotion sought by terrorists aiming for jujitsu politics.

The power of jujitsu politics and the importance of anger reactions in making the strategy successful are hidden by definitions of terrorism that focus only on fear and coercion.

Why Is Jujitsu Politics so Hard to See?

So far as we aware, only one U.S. definition of terrorism, in the U.S. Code of Federal Regulations, does not refer to intimidation and coercion:  “premeditated, politically motivated violence perpetrated against noncombatant targets by subnational groups or clandestine agents, usually intended to influence an audience.”[11] The USCFR definition is used by the U.S. Central Intelligence Agency (CIA) and by the U.S. State Department.

As states through history have used fear to coerce, compel, and intimidate their own and other citizens [12], states facing non-state violence find it obvious that coercion based on fear is what the terrorist threat must be about. This easy projection of state motives to terrorist motives must be resisted, however, because it has several unhelpful consequences.

The first consequence is to make terrorist motivations difficult to analyze. When one among many possible motives for a terrorist attack is enshrined in the very definition of terrorism, all other possibilities tend to disappear. For this reason, no social scientist would put a hy­pothetical explanation of a phenomenon in the definition of the phe­nomenon of interest. It is perhaps an indicator of the status of social science in government offices that so many government definitions of terrorism make this move.

The second consequence of identifying terrorism with coercion is to focus on fear as the key emotion for understanding and resisting terrorism. Terrorists want to terrorize! If the target of terrorist attacks, both the government and its citizens, can resist being intimidated, then the terrorists cannot succeed. And how better to demonstrate the con­quest of fear than to strike back against the terrorists, to mobilize new resources to fight terrorism, to strengthen government power to fight terrorism— in short, to declare war on terrorism. Unfortunately, as just described, terrorists count on anger and outrage at least as much as they count on fear.

A third and related consequence of including fear and coercion in government definitions of terrorism is that citizens are blinded to the dangers of jujitsu politics. This is a mass psychology problem, not a spe­cialist problem. Many who study terrorism, inside government as well as outside, understand that fear and coercion are not the only goals of terrorist attacks. But the citizens who read and hear government defini­tions of terrorism, especially as these are embodied in the opinions of politicians and pundits, believe that as long as they do not give in to fear and as long as they support war against terrorists, they have done their best. The easy success of jujitsu politics is the price of focusing on fear and ignoring anger as the predominant reaction to terrorist attack.

Happily there is one U.S. government definition, in the U.S. Code of Federal Regulation, that does not refer to intimidation and coer­cion: “premeditated, politically motivated violence perpetrated against noncombatant targets by subnational groups or clandestine agents, usu­ally intended to influence an audience.” If the U.S. Code definition were to replace other U.S. government definitions, then citizens, policy makers, and security officials might more easily see the power of jujitsu politics—and deny the terrorists the reaction they seek.

[6] The U.S. Federal Bureau of Investigation (FBI) defines terrorism as “the unlawful use of force or violence against persons or property to intimidate or coerce a government, the civilian population, or any segment thereof, in furtherance of political or social objectives.” Available at

[7] The U.S. Department of Defense defines terrorism as "the unlawful use of violence or threat of violence to instill fear and coerce governments or societies. Terrorism is often motivated by religious, political, or other ideological beliefs and committed in the pursuit of goals that are usually political."  Department of Defense Dictionary of Military and Associated Terms, Joint Publication 1-02, 8 November 2002 (As amended through 31 January 2011).  Available at http://www.people.mil/Portals/56/Documents/rtm/jp1_02.pdf

[8] The U.S. Federal Emergency Management Agency (FEMA) offers a definition of terrorism:  “Terrorism is the use of force or violence against persons or property in violation of the criminal laws of the United States for purposes of intimidation, coercion, or ransom. Terrorists often use threats to:

[9] The USA PATRIOT Act of 2001 defines domestic terrorism as "activities that (A) involve acts dangerous to human life that are a violation of the criminal laws of the U.S. or of any state; (B) appear to be intended (i) to intimidate or coerce a civilian population; (ii) to influence the policy of a government by intimidation or coercion; or (iii) to affect the conduct of a government by mass destruction, assassination, or kidnapping; and (C) occur primarily within the territorial jurisdiction of the U.S." Available at http://www.ratical.org/ratville/CAH/Section802.html#802

[10] The Department of Homeland Security, in the law creating DHS, defines terrorism as “any activity that— (A) involves an act that— (i) is dangerous to human life or potentially destructive of critical infrastructure or key resources; and (ii) is a violation of the criminal laws of the United States or of any State or other subdivision of the United States; and (B) appears to be intended— (i) to intimidate or coerce a civilian population; (ii) to influence the policy of a government by intimidation or coercion; or (iii) to affect the conduct of a government by mass destruction, assassination, or kidnapping.” Available at https://www.dhs.gov/xlibrary/assets/hr_5005_enr.pdf

[11] Title 22 of the U.S. Code of Federal Regulations, Section 2656f(d), defines terrorism as “premeditated, politically motivated violence perpetrated against noncombatant targets by subnational groups or clandestine agents, usually intended to influence an audience.” The U.S. State Department uses this definition for its yearly reports on terrorist activity, and the CIA likewise uses this definition. Available at http://www.nij.gov/topics/crime/terrorism/pages/welcome.aspx