AQAM’s fatal attacks and violent plots in the US 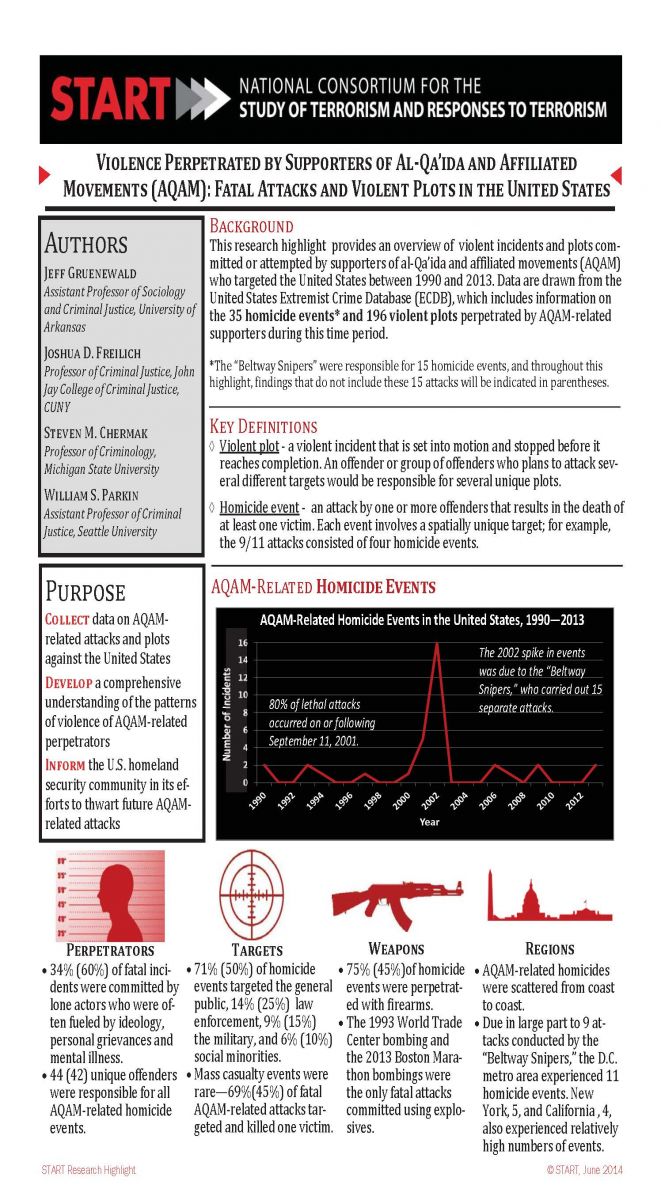 In a new report and research brief, START researchers examine the fatal attacks and violent plots committed or attempted by supporters of al-Qa’ida and its affiliated movement (AQAM) in the United States (1990-2013). The new report and brief look at the perpetrators, targets, weapons and locations associated with these incidents.

Data are drawn from the United States Extremist Crime Database (ECDB), which includes information on the 35 homicide events* and 196 violent plots perpetrated by AQAM-related supporters during this time period. (*The “Beltway Snipers” were responsible for 15 homicide events, and throughout the report and brief, findings that do not include these 15 attacks are indicated in parenthesis.)

The new research brief, “Violence Perpetrated by Supporters of Al-Qa’ida and Affiliated

Movements (AQAM): Fatal Attacks and Violent Plots in the United States,” can be downloaded from the START website.

It is drawn from a report of the same name, “Violence Perpetrated by Supporters of Al-Qa’ida and Affiliated Movements (AQAM): Fatal Attacks and Violent Plots in the United States,” published by START.

The research is supported by the Department of Homeland Security Science and Technology Directorate’s Resilient Systems Division and is part of a larger effort to develop a comprehensive database on Terrorism and Extremist Violence in the United States (TEVUS).

TEVUS integrates data from the Global Terrorism Database, the American Terrorism Study, Profiles of Perpetrators of Terrorism in the U.S., and the U.S. Extremist Crime Database. Led by the National Consortium for the Study of Terrorism and Responses to Terrorism (START), the research team is creating a resource that will allow operational and academic end-users to conduct unprecedented analyses that incorporate incident, perpetrator, and geospatial information.