Diving into the Global Terrorism Minor 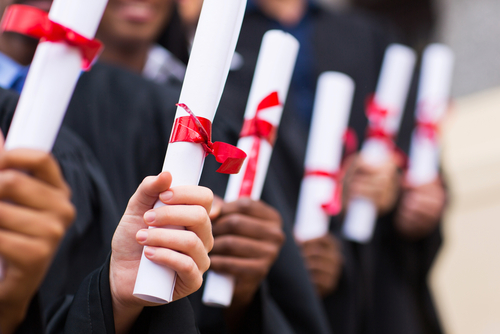 Three years ago, an unlikely friendship formed when Dr. Katherine Izsak divided her class into groups and began quickly handing out details of a fictional terrorist attack and assigning roles for each student to play as the hypothetical events unfolded. Students were instructed to play the part of first responders, police officers, government representatives, news reporters, community leaders or mental health and social services practitioners.

Through START’s Global Terrorism Minor, the students were participating in their first ICONS simulation – a scenario driven exercise designed to advance understanding of complex problems and strengthen decision-making ability that could diminish the number of potential casualties, navigate crises, think strategically and negotiate collaboratively.

As the classroom buzzed with excitement, students broke into groups and began analyzing the simulation through the lenses of their respective academic disciplines. An economics major, Emily Quinn was eager to discuss the financial and economic implications of the attack. Her teammate Anna Shields, a psychology major, wanted to talk about what motivated the attack– what moves someone from holding radical beliefs to committing violent extremist crimes? Jacob Segal, a government and politics major, was more interested in analyzing the efficacy of the government response to the crisis.

The group members talked over one another, trying to make their voices heard and direct the conversation to the topic they felt comfortable addressing. Each wanted to dictate a course of action that aligned with his or her perspective of “the best outcome.”

When Shields was stumped – the attack didn’t seem to fulfill the reasoned motivations of the terrorist group – Segal stepped in. He provide an analysis of the government actions and reactions that may have influenced the group to act. The group moved forward and completed the simulation exercise.

“At START, I quickly learned that in order to comprehensibly solve a problem, you must take an interdisciplinary approach, learning from students who have different academic backgrounds to wholly understand the different implications of potential solutions,” said Quinn, now a senior.

Through that first simulation experience Shields said that she got a taste of two of the Global Terrorism Minor’s greatest strengths: its interdisciplinary nature and its capacity for hands-on experiential content.

“Throughout this minor, I learned how to work with people that came from a different academic background and solved problems vastly differently than I would,” Shields said. “If it weren’t for the minor, I would have never had the opportunity to work with them. I think this prepares me much better for the real world workforce.”

Segal highlighted another benefit of this cross-collaboration: the friendships made.

“The friendships that you make throughout the Global Terrorism Minor are long-lasting,” he said. “The people I have met in this minor have shaped my career goals and aspirations. The people you work with in groups become your colleagues in future careers. It is important to begin building these diverse relationships while still in college.”

Segal laughed as he recalled that first simulation and small group work some three years ago, noting that when that class ended, he, Quinn and Shields exchanged phone numbers to help each other with future assignments. Now, on the cusp of graduation, the three have remained close, asking for advice and input on resumes and job applications, and planning photos together in caps and gowns.

“I am grateful for the opportunities START awarded me, both inside and outside of the classroom. START gave me an academic family.”

To apply for the global terrorism minor click here.