Jacob Holzer, M.D.​, on staff at ​McLean Hospital and the Massachusetts General Physicians Organization​, and faculty at Harvard Medical School​, spoke to START interns in July on the complex clinical and behavioral aspects of lone-actor terrorism. 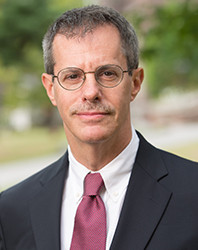 Holzer began his career in the U.S. Air Force before earning his medical degree from the ​Tufts School of Medicine​. He completed a medical internship at Tufts, and psychiatry residency at Yale-New Haven Hospital​. In addition to his work in clinical psychiatry, he practices forensic psychiatry and has an academic focus in the relationship of forensic mental health and national security.

Holzer began by discussing a “background of heated rhetoric,” which creates an environment where lone-actor terrorists might feel empowered to commit acts of violence.

In 2010, former Vice Presidential Candidate Sarah Palin posted an image on Facebook asking supporters to vote against Democratic representatives that supported the Affordable Care Act. The post contained a map displaying the members’ districts, each of which was marked with a gun sight. When a mentally ill gunman critically wounded Representative Gabrielle Giffords, Holzer said that some at the time were ​concerned​ that individuals were taking the violent imagery of Palin’s post literally.

“It’s not clear if there was a direct link between the Facebook post and the shooting,” Holzer said. “But it is clear that this sort of rhetoric will foster violence in some individuals. Some people will interpret these messages concretely and perceive the need to act in a violent manner.”

While it may be difficult for many to understand why an individual would commit such a seemingly random act of violence, Holzer emphasized that some lone-actor attacks are preventable.

“These attacks don’t come out of the blue,” he said. “There are early warning signs.” He discussed numerous research findings, including a common finding of “internal inconsistencies” in the emotional states of many lone-actor perpetrators.

Holzer said that a number of factors--such as mental illness, early childhood trauma, criminal history and financial stress--were present in the lives of many lone-actor terrorists.

“In particular, there is a high rate of criminal history,” Holzer said. “Paul Gill of University College London found that trait in almost half of the lone attackers he studied. Almost all of these individuals went through a long period of planning before perpetrating their attacks.”

He said research has shown a significantly higher rate of psychiatric illness in lone-actor individuals compared with individuals who join terrorist organizations.

“However, these individuals would most likely be weeded out of organized terrorist groups,” Holzer said.

Holzer told interns that while finding lone-actor terrorists before they act can be difficult, improved early detection may be possible.

“I think it’s possible to identify individuals that are at higher risk,” he said. “The individualized research and data used to analyze the performance of professional baseball players, for example, is a relatively new phenomenon. I suspect you may be able to apply that kind of science to lone-actor terrorism.”

Yet Holzer said that the individual idiosyncrasies of lone-actor terrorists continue to present a major problem for counterterrorism efforts.

“I think rehabilitating lone actors would be more challenging,” he said. “In this group, personality seems more entrenched.”

Holzer is currently working with a number of other scholars on a forthcoming book, ​Lone-Actor Terrorism: An Integrated Framework​. The book addresses a wide range of issues, including clinical issues, social media usage, rhetoric, history, ethics, geographic factors, legal aspects, intelligence, and comparative law enforcement throughout the United States and Europe.