As Marissa Latterman works her way through a competitive fellowship with the National Institutes of Health, she finds herself calling upon her training as a Chemical Biological (CB) Special Projects Intern for START in the summer of 2013.

Through the National Biosafety and Biocontainment Training Program (NBBTP), Latterman and her colleagues are evaluating the findings from 2014 in the NIH Intramural Database for dual use research of concern (DURC). It is similar to the analysis she conducted for START’s Chemical and Biological Non-State Adversary Database (CABNSAD) that she conducted at START. 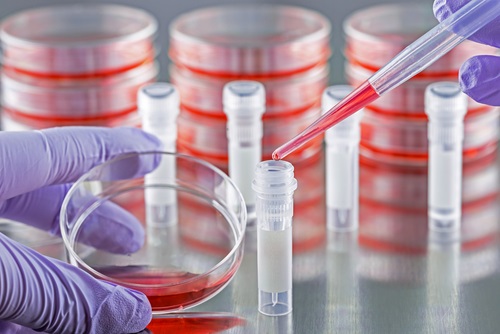 Latterman works hands on in a biosafety lab, while also training in the principles of biosafety and biocontainment as a pre-doctoral fellow in NBBTP.

Latterman’s passion for biosafety and biosecurity developed as an undergraduate at Michigan Technological University where she earned her bachelor’s degree in Microbiology in 2012. There she had her beginnings working in a laboratory environment, and learned that laboratory safety “isn’t simply a defined set of rules to follow, it is a culture that both students and professionals alike must adopt and embrace to ensure responsible scientific investigation.”

Through graduate coursework, her interests became further refined to biosecurity, disaster preparedness, environmental and occupational health. She has strived to position herself in a career where she can work in both science and public policy on a global scale.

She would like to leave her mark by changing the way the public views the scientific research industry.

“I am passionate about improving public trust and perception regarding the sciences here in the U.S. as well as globally,” Latterman said. “The incidents regarding issues in biocontainment that occurred at both the NIH and the CDC last year demonstrate how important accountability and transparency are in regards to high containment laboratories.”

Latterman said she foresees a shift towards transparency in biosafety and biosecurity research.

“Major changes in the field of biosafety and biosecurity reside in the increase of public awareness as well as political and social demands on regulatory agencies,” she explained.

As fervent as she is about biocontainment and biosafety research, Latterman is fascinated by the technology used to detect chemical and biological threats. She is equally captivated by the modernizations to the detection systems, which can be vital to emergency response and military personnel.

“The greatest accomplishment I have so far is working as a young professional at the National Institutes of Health,” she said. “I definitely know that if not for the awesome opportunity I had to be a START intern I would not have my current position of any of the exciting biosafety/biosecurity opportunities that are ahead of me at NIH.”

Disclaimer:  The content is solely the responsibility of the author and does not necessarily represent the official views of the National Institutes of Health.

Understanding the Rise and Resilience of Islamic State Khorasan in Afghanistan