From a near kidnapping in Morocco to a START internship

The year is 2013 and Brian DeShong has just arrived in the tiny village of Erfoud. It is 6 a.m. and he and his friend are standing on the outskirts of the desert, the streets are deserted.  Hungry, tired, and unsure of what to do next, a man suddenly appears offering to bring them to the famous dunes of the Sahara.

“Naturally, he brings us in to his home, and makes us some mint tea… as is customary in the south of Morocco,” describes DeShong. He and his friend begin to negotiate a price with the man.

With the price set about 60 dollars for both DeShong and his friend, both parties agree it is still too early to begin their journey. They follow this man to his friend’s house to sleep for a few hours, reuniting with the man when they wake up around noon.

“He walks us a few miles into the village square... tells us to stand over in the corner... on a slightly raised wooden platform,” explains DeShong. 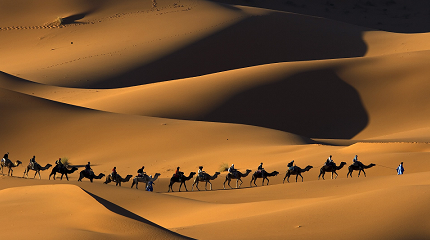 The man then disappears, coming back ten minutes later with two other Moroccans. At this point they are, gesticulating and speaking the local dialect, and neither DeShong nor his friend have any clue what is being negotiated. After the Moroccan men finish their discussion DeShong and his friend are led to the back of a market and piled in to a white van.

“This van is clearly built for seven passengers, but that doesn’t stop fifteen people from piling in. My friend and I are put in the trunk with a third man who shares his oranges with us… so we know now that we are safe,” says DeShong, somewhat acrimoniously.

After about twenty minutes they come to an abrupt stop. DeShong, his friend, and the Moroccan man get out of the van and are left in the middle of a barren land, with no car, village, nor other person in sight. The Moroccan man proceeds to pull out a satellite phone and begins making calls. Fifteen minutes pass before a black Lexus, fully equipped with special tires and ventilation systems to deal with the unforgiving landscape, begins to approach. Once again Deshong and his friend find themselves in the back of a car.

While everything, DeShong admits, was “sketchy and ad-libbed we never got any bad feelings from anyone. We also knew that tourism is Morocco’s biggest industry” which is much “safer and more profitable than kidnapping.”

Stopping once, the cheerful Lexus driver who spoke broken French and English allowed DeShong and his friend to get out and take pictures; a short ride later they find themselves staring down at the reassuring landscape of the famous dunes of the Sahara as well as the familiar outline of hotels. DeShong would like everyone to know that while he is still here to tell the tale and admits that there was, “never any real danger… a few small missteps could have made it a much more unpleasant experience.”

Despite the stressful experience that won him a coveted START mug, DeShong continues to have a growing interest in the region, and while in Morocco, brought his Arabic to fluency. In the future, he would like to pursue a doctorate degree focusing on international political conflict and security in the Middle East and Africa, or in international law and policy. Currently at START, DeShong works with the Unconventional Weapons and Technology (UWT) team on the Aviation Insider Threat project.

“Working on the Insider Threat project is a chance to learn about a new aspect of national defense, while also contributing to the actual efforts being made in the field,” says DeShong.

This fall and winter, DeShong will intern at the Danish Institute of Human Rights’ Middle East and North Africa Bureau, focusing on migration and human rights in the region. J.R.R. Tolkien wrote, “All we have to decide is what to do with the time that is given us.” Right now DeShong is just trying to make the most of the experiences and opportunities that have come his way so far:

“I’ve been very fortunate so far, so I’d like to take what I’ve gotten and try to give back what I can.”

Lecture: Experiences on the Majority Staff of the House Foreign Affairs Committee

Trump's Deployment of Terrorist Designations: A Look at the IRGC and Russian Imperial Movement
END_OF_DOCUMENT_TOKEN_TO_BE_REPLACED