From Idaho to Utah; Ukraine to D.C.

When START intern Bryan Mansfield is not coding data for profiles of criminal organizations, he can be found wandering Washington, D.C., museums, feeding his addiction to fantasy basketball or getting into trouble in Ukrainian metro stations. 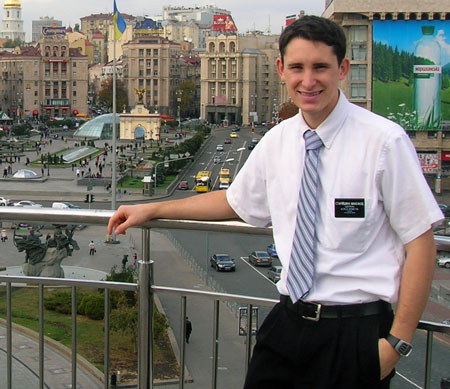 Mansfield, an Idaho native studying at Brigham Young University (BYU), is interning with START’s project on illicit trafficking in Europe and Africa. Mansfield is currently learning different coding techniques, which he applies to illicit traffic data in order to assemble profiles of the trafficking organizations.

“There are lots of criteria that we use to identify groups and their capabilities,” Mansfield said.

Mansfield, however, is not one to back down from a challenge. At 19, Mansfield took a leave of absence from BYU and moved to western Ukraine, where he served a two-year mission for his church. Ukraine is a nearly bilingual country, and many Ukrainians speak both Ukrainian and Russian. Mansfield, who took an intensive three-month long language course before leaving, learned both.

"We lived in regular apartments. They were modeled in the old Soviet-style, but were usually nice on the inside,” Mansfield said. “I only remember one apartment being like those Sochi ‘nightmare’ hotels.”

When he had downtime, Mansfield made every effort to soak up the Ukrainian culture. He frequently went sightseeing with friends in the same mission.

“On one excursion, we explored the catacombs under a famous old Orthodox church in Kiev. I tried every type of food I could- most were delicious. We also spent a good deal of time volunteer-teaching English classes,” Mansfield said.

On Saturdays, Mansfield would hang out with Ukrainian friends, teaching them how to play traditional American sports including basketball and American football. Mansfield said, “They always asked me, ‘Today we will play American football, or real football?’”

Mansfield had his fair share of adventures while abroad, some more dangerous than others.

“One day, while my friend and I were standing on the metro platform waiting for the next train and an odd-looking guy walked up to us. He didn’t say a word, just walked up, pulled a pistol

out of his side bag and pointed it at me,” Mansfield said. “I immediately put my hands up and took a step or two back. He pointed the gun at me for five or ten seconds, to me it felt like forever, then he laughed, put it back in his bag and walked off the platform.”

Coding documents may seem tame when compared to getting held up at train stations in foreign countries. However, interning at START is an important step in the right direction for Mansfield.

“I hope to get enough experience in valuable skills like coding, data analysis and writing to be able to enter the intelligence community workforce in the future,” Mansfield said.

Mansfield plans to complete a Master’s in Public Administration.

“I think a dream job for me would be compiling important research and making it accessible to the public. That would include being able to put complicated academic language into understandable English and presentable data.”

As for that fantasy basketball addiction?

“I try to argue that fantasy basketball is not an addiction, but… one of the first things I did this morning was check my lineup for today’s game,” Mansfield said. “The first step is acceptance."

National Institute of Justice: Hate crimes: National database identifies traits and motivations marking distinct pathways of people who commit bias-based offenses
Business Insider: Inside a DC jail's 'Patriot Wing,' where Capitol riot defendants sing the national anthem and act like prisoners of war — but struggle to cope with being locked up
USA Today: When does speech become dangerous? Rep. Gosar’s ties to white nationalists added to concerns about his video
END_OF_DOCUMENT_TOKEN_TO_BE_REPLACED