Gabriel Rice was no stranger to START or the Global Terrorism Database (GTD) upon applying to the internship this past winter.

“I used the GTD frequently as an undergrad because START’s materials are entirely objective,” said Rice, currently an intern for the Open Source Europe and Africa project. “When studying a topic as controversial and potentially subjective as terrorism in the Middle East, objective sources are essential.” 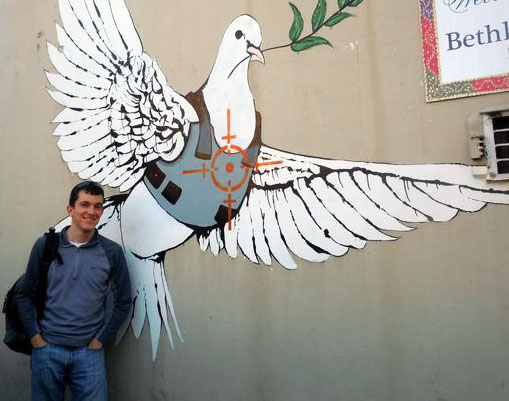 “The best part of studying abroad was being completely immersed in a culture so different from my own,” Rice said.

He learned the nuances of interacting within a different culture context; even daily tasks like greeting people, eating at restaurants and grocery shopping were carried out in a manner different to what he was used to.

“I quickly learned that eating at a Yemeni restaurant requires removing your shoes and taking care not to point the bottom of your feet at someone, which is considered insulting,” said Rice, who also learned that in Middle Eastern culture, schedules are not nearly as rigid as those in the United States.

For Rice, the most fulfilling aspect of living abroad was successfully using Arabic. Rice learned an Arabic dialect used in urban areas, which made for quite an adventure when he tried to cross the border from Jordan to Israel.

“I couldn’t understand my taxi driver because he spoke a dialect common to the rural regions of Jordan. So, for most of the time, I was a little concerned that he had misunderstood my directions, especially as the terrain became more and more remote,” Rice said. “Fortunately, I got where I wanted to go and my driver was really nice. He noticed my trepidation and bought me a coffee along the way.”

While prepping for his trip abroad, Rice had anticipated working with a challenging language barrier. What Rice had not anticipated was another, far more literal barrier.

“The heightened security was one of the most challenging aspects of living abroad,” Rice said. He eventually grew accustomed to seeing soldiers in the streets and walking through a metal detector every time he went to the grocery store.

Rice’s experiences abroad, coupled with his longstanding interest in counterterrorism studies, fueled his desire to learn more about international affairs. In addition to his START internship, Rice is currently completing a master’s degree in political science and international relations at George Mason University in Fairfax, Va.

Rice hopes to work as an intelligence analyst for the U.S. government or a private institution, where he can apply his knowledge of the Middle East and terrorism as part of his daily duties.

“Because I am graduating in May, I am focusing on honing my skills for my future career. START has provided me with opportunities to improve my writing and Arabic, and I know that the daunting task of applying for jobs this semester has become easier because of my internship here,” Rice said.

National Institute of Justice: Hate crimes: National database identifies traits and motivations marking distinct pathways of people who commit bias-based offenses
Business Insider: Inside a DC jail's 'Patriot Wing,' where Capitol riot defendants sing the national anthem and act like prisoners of war — but struggle to cope with being locked up
USA Today: When does speech become dangerous? Rep. Gosar’s ties to white nationalists added to concerns about his video
END_OF_DOCUMENT_TOKEN_TO_BE_REPLACED