From Zoo Animals to Terrorists: An intern's varied interests 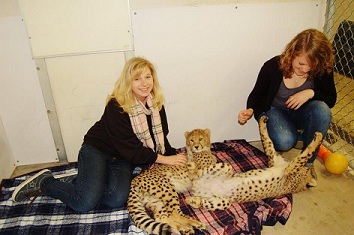 Only a sophomore, Tayler Schmidt is already in her fourth semester interning for START. She spent three years working with the Risk Communication and Resilience team before switching over to work on the Profiles of Individual Radicalization in the United States (PIRUS) project to understand domestic radicalization.

“Ever since I was a little girl, I’ve been playing with exotic animals,” she said. “I’ve swam with dolphins, been kissed by sea lions, trained snow leopards, handled an octopus, and took home a baby clouded leopard for my birthday. I have played with other animals such as cheetahs, lynxes, caracals, wolves, dingos, foxes, and lemurs.”

She gained these rare opportunities due to her father’s executive position at many zoos and aquariums across the country and by working as a customer service agent within many of them. You may even remember her from Good Morning America with Jack Hanna when she showcased a baby wallaby.

What drew Schmidt from a life of exotic animals to the world of terrorism studies?

“I am constantly learning and growing at START and it has become home to me,” she said. “I have gained numerous valuable skills that can be applied in so many ways – how to transcribe audio and video for research purposes, write proposals, code qualitative and quantitative data, and perform trend analysis.”

Schmidt has also appreciated the professional opportunities she’s been afforded while still a student. She will present a paper she wrote through START on the evolution of media framing at the upcoming Eastern Communication Association Conference.

After her time at the University of Maryland and her work at START, Schmidt hopes to acquire a doctorate in the field of terrorism studies and learn Arabic. Her ideal career path will lead her to work at a think tank such as the Arab Gulf States Institute, the Carnegie Endowment for International Peace, or the Middle East Institute. She also could see herself conducting research for other government-funded institutions like the Combating Terrorism Center, Naval Research Laboratory or the Central Intelligence Agency.

The Conversation: As states reopen, tensions flare between the rule followers and rule breakers
Business Insider: Why anti-lockdown protests are a 'magnet' for white supremacists and far-right extremists
Vox: Media coverage has blown anti-lockdown protests out of proportion
END_OF_DOCUMENT_TOKEN_TO_BE_REPLACED