My husband, Paul, grew up in a warm and loving family as the eldest child of his doting parents, Vic and Eileen, with his brother Tom and sister Michelle. The family moved from Largo to Waldorf when Paul was in the third grade, becoming part of the kind of close-knit, American community that this country is famous for. He was a better-than-average soccer player. He played the trombone well enough to be selected to travel to Italy to play for the McDonald All-American Band. He loved hunting and fishing. He was rarely seen without his best friend Thom at this side, with whom he got into several legendary escapades. He became a volunteer firefighter at the age of sixteen. 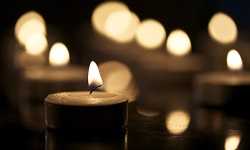 After high school he moved on to the UMBC where I met him in my Paramedic classes, but I fell in love with him after he dutifully cared for me when I broke my ankle playing rugby (and bought me chocolate ice cream). He had an irreverent sense of humor that was unmatched, a pee-your-pants laughing kind of guy, a joy to be around. I graduated from UMBC but Paul dropped out after unfortunately circumstances put an end to his dream of becoming a Paramedic as well. We married and settled in Upper Marlboro, where John and Joey were born, moving to Chesapeake Beach in 2003.

For the next fifteen years after college Paul worked a series of food-service and hospitality positions, because that was where he believed his talents were. He was the Beverage Manager at the Hyatt Capitol Hill, jointly owned a catering company, and became a skilled chef. But he found that the nights, weekends, and holidays world of the hospitality industry didn’t leave enough time for family, and he was never happy. Paul courageously made a mid-life decision to go back to college, obtaining a bachelor’s degree in Homeland Security. He was extremely lucky to find an internship at the National Consortium for the Study of Terrorism and Responses to Terrorism, a prestigious organization with a much easier-to-remember acronym, START. It was only there that he found himself and flowered. Paul became a well-respected researcher and project manager. During his time with START, he coordinated several projects on radiological and nuclear security, focusing on ways to prevent nuclear terrorism. Paul also contributed to a number of other research efforts relevant to national security, including projects on maritime piracy and counterterrorism, as well as the Global Terrorism Database, the largest terrorism database in the world. He worked to make the world a better and safer place for the rest of us.

Paul was absolutely devoted to our sons John and Joey. Having learned the value of passion and education late in life he constantly pushed them to become their best selves, both in their studies and through outside interests such as lacrosse and Scouting. He reminded them to live a moral and ethical life, to care for each other, contribute to the world around them, and to value their American citizenship. Oh, and that sense of humor. He colored our home with that sense of humor.

Paul was the love of my life, and will forever be missed.

So here’s what I give to you. Find your passion and live it. Work to make the world a better place in whatever way God has meant for you. Don’t be afraid to change course. Love your friends and neighbors. Cherish your family. Pursue your dreams. Treat each day as the gift that it is, for there might not be another.

You have decided the length of our lives. You know how many months we will live, and we are not given a minute longer. Job 14:5

NBC: Synagogue hostage crisis reminds us that neo-Nazis aren't the only ones targeting Jews
Stars and Stripes: Researchers find fourfold annual increase in number of Americans with military ties added to extremist list
KCBS Radio: How some are fueling the extremists' fire with charges in the January 6th insurrection
END_OF_DOCUMENT_TOKEN_TO_BE_REPLACED

Insurgent Terrorism: Intergroup Relationships and the Killing of Civilians
END_OF_DOCUMENT_TOKEN_TO_BE_REPLACED