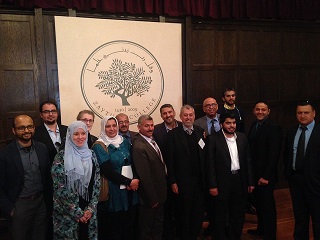 On Tuesday, April 7, START researchers met with a delegation of Countering Radical Ideologies (or Countering Violent Extremism) experts from the Middle East. The individuals were invited to the area by the State Department to explore issues of CVE in the United States. These twelve individuals served as advisors and analysts in government and civil society.

The delegation consisted of twelve security professionals, academics and policymakers representing eight countries; Egypt, Iraq, Kuwait, Lebanon, Morocco, Qatar, Saudi Arabia and Tunisia. Among the organizations they represented were the National Center for Security Studies, the Ministry of Defense and the Baghdad Operations Command, International Security Forces (Lebanon), the Rabat Chamber of Representatives and the Ministry of Islamic Affairs.

“It is always a pleasure engaging in discussion over our research with CVE experts from around the world,” Braniff said. “Since these delegation members were particularly well-acquainted with the causes and consequences of extremism, I was able to gain a great deal of insight.  Of particular interest was the very mixed response from the delegation when I asked them how concerned they were with the heightened level of sectarian tension currently facing the Muslim world.”