As a child, START intern Matthew Bednarz was determined to serve his country like his grandfather did in World War II. To this day, Bednarz’s Purple Heart winning grandfather continues to inspire him as he hones his professional aspirations and career goals in the intelligence community. 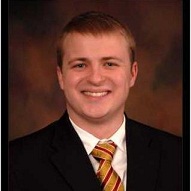 After the destruction of the Twin Towers in 2001, Bednarz decided to pursue a career in counterterrorism. Through his undergraduate coursework at Marquette University as an International Relations and Affairs major, Bednarz developed a passion for studying terrorist organizations, behaviors, and counterterrorism strategies.

After graduating from Marquette in 2012, Bednarz began his graduate education in counterterrorism and intelligence analysis at The Institute of World Politics, pursuing a master’s in Strategic Intelligence Studies.

“I think it’s really important to supplement your education with some valuable on-the-job experience,” Bednarz said. “So, I joined START last fall researching and coding data for the Global Terrorism Database (GTD).”

Bednarz is now working on his second project at START, contributing to the Profiles of Individual Radicalization in the United States (PIRUS) project. Through those profiles, Bednarz and his colleagues attempt to determine when, where, why and how these individuals radicalized. As a strong writer with a keen eye for detail, he hopes to write multiple case studies with his current START team that contribute to the understanding of radicalization in the United States.

“Between working on the PIRUS team and the GTD last semester, I’ve gained experience doing the basic work that is done in the intelligence field and now have a decent understanding of how it can be use d on the job,” Bednarz said.

Bednarz has been so impressed with his experience at START that he has begun recruiting his classmates to join him. Three more students from the Institute of World Politics joined the ranks this semester.

“My experience at START directly translates to my career goals, and I know I’m not alone,” he said. “START provides a launch pad for a career in counterterrorism.”In the next five years, Bednarz plans to pursue a career in the intelligence community, working for the government or as government contractor.

National Institute of Justice: Hate crimes: National database identifies traits and motivations marking distinct pathways of people who commit bias-based offenses
Business Insider: Inside a DC jail's 'Patriot Wing,' where Capitol riot defendants sing the national anthem and act like prisoners of war — but struggle to cope with being locked up
USA Today: When does speech become dangerous? Rep. Gosar’s ties to white nationalists added to concerns about his video
END_OF_DOCUMENT_TOKEN_TO_BE_REPLACED