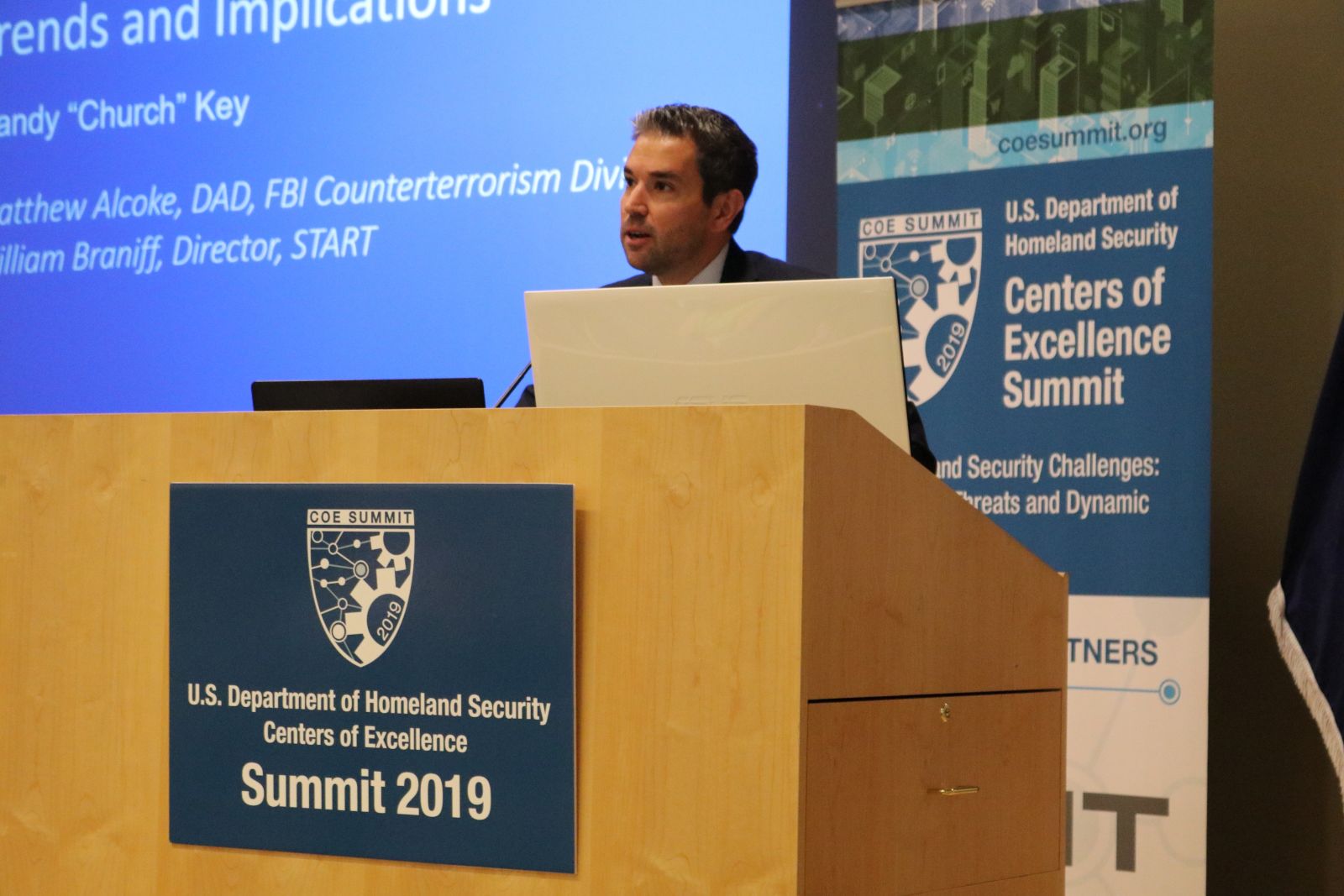 START Director William Braniff appeared on a panel on Evolving Threat Landscapes, which explored gray zone threats both internationally and in the domestic space.

“It’s my pleasure to represent START here at George Mason University, and to roll out some new top-level findings from the preeminent Global Terrorism Database, as well as discuss a few domestic trends evidenced by the Extremist Crime Database and the Profiles of Individual Radicalization in the United States,” Braniff said.

During his panel, Braniff discussed the need for human researchers in collecting and analyzing terrorism research data, in addition to the use of automated tools such as artificial intelligence and natural language processing.

“If you need accurate data about messy, emotive and politicized topics around human behavior like terrorism, it takes human labor and resources. And it’s our firm belief at START that when blood and treasure are on the line, it’s worth putting resources to high-quality data collection,” Braniff said.

Unconventional Weapons and Technology (UWT) Director Steve Sin also appeared on a panel about soft targets in cyber space. Sin focused on research that the UWT team has conducted on Russian influence campaigns on social media sites such as Twitter.

Sin went on to explain the unique nature of Russian bots on Twitter.

Additionally, the Geospatial Research Unit hosted a booth during the Innovation Showcase and also highlighted their work with the Arctic Domain Awareness Center.

“I feel like this Summit is a glowing success,” said Marcus Boyd, senior researcher and head of the Geospatial Research Unit (GRU). “It’s great to see that the DHS COE community continues to improve and impress.”

The GRU team engaged with many people who visited the booth throughout both days of the Summit.

“Our flagship product, the GTD, seems to be how most people know us,” Boyd said. “But once they find out about START, they learn there is so much more. For instance, there seems to be quite a lot of interest in what our geospatial team is working on in terms of imagery analysis, remote sensing and data analysis.”

START interns also attended the Summit, including participating in an Education Roundtable.

“This is an excellent opportunity for our students,” START Experiential Education Specialist Eva Coll said. “They were able to network with professionals in the national security field, and gain valuable insight into potential future careers.”

Washington Post: Courier for Mexican cartel pleads guilty to money laundering
National Institute of Justice: Domestic radicalization and deradicalization: Insights from family and friends
Russia Matters: Foreign fighters in Ukraine: What concerns should really be on the agenda?
END_OF_DOCUMENT_TOKEN_TO_BE_REPLACED