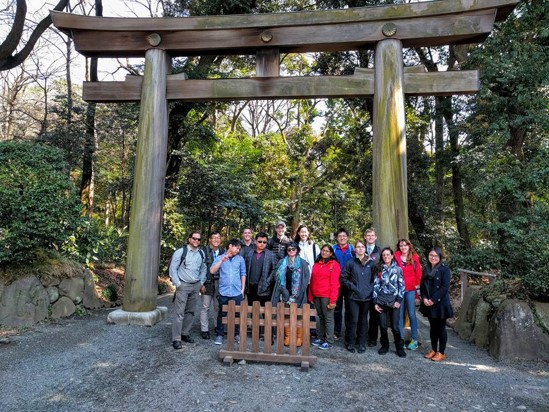 The first stop on the trip was Tokyo, where students met with the Vice Minister of Japan’s Ministry for Reconstruction, completed disaster simulations at the Bosaikan Life Safety Center and learned about traditional Buddhism and Shintoism.

Next, the students traveled to Sendai, the largest city of the Tohoku region and the region most heavily impacted by the March 2011 disaster. Students learned about the earthquake, tsunami and Fukushima nuclear disaster from faculty at Tohoku University and beta-tested a student-created disaster mitigation card game with Japanese university students.

The group then traveled to another town heavily affected by the March 2011 disaster, Kesennuma. There, they visited a memorial to community members who died in the tsunami, learned about K-12 disaster preparedness education and met with the superintendent of the Kesennuma Board of Education about the long-term impact of the disaster on the surrounding community.

Finally, the students ventured just south of Kesennuma to the cities of Minamisanriku and Ishinomaki. They participated in a guided tour by member of the NPO Sokoage where they learned about the seawall being built to protect the Sanriku coast from future disasters and visited an art exhibition featuring photographs of the aftermath of the disaster, the ruins of an elementary school and a temporary business district constructed from housing units.

“I absolutely love this program,” Hutchison said. “As a student, we get told all the time in lecture the impacts of disasters on the landscape and on the lives of the people living in the affected region, but we rarely feel any sense of attachment or truly understand the full weight of what has occurred to these people. By going through this program, seeing the affected Tohoku region and speaking to the survivors of this tragedy, the reality of their situation finally sunk in.”

The program’s unique combination of online and in-person learning will be the subject of a presentation by Collier-Murayama, Izsak and two students from the program at UMD’s annual Innovations in Teaching and Learning Conference.

“Short-term study abroad programs are becoming quite popular, and some students who otherwise would not study abroad are choosing these programs because they fit into their busy schedules,” Murayama said. “In this Japan program, by participating in online coursework before and after the experience abroad, students have additional time and resources to prepare for and reflect on their learning in Japan in a structured way. I am very proud of our students and what they have accomplished.”