Tennis and U.S. Army give way to “American Dream”

Tennis and U.S. Army give way to “American Dream” 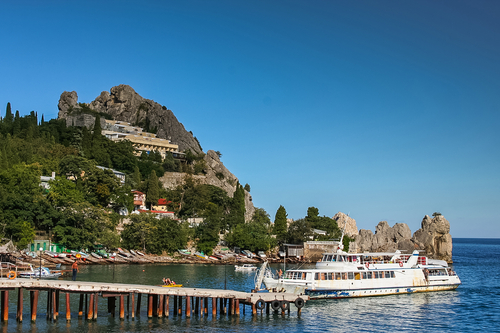 “Walmart,” START intern Mariami Dolashvili said when asked to recall her first days in the United States. “Walmart was unlike anything I had ever seen in Ukraine. As I stood in the store, it was the first moment that it really sunk in. I was in America and I could have my own ‘American Dream.’”

For Dolashvili the sprawling retailer was a symbol of change and the opportunities afforded to her by a tennis scholarship at the University Of Maryland, Baltimore County.

At age 17, Dolashvili left her sister, parents and friends in Crimea to set out on her own in the United States. Just two months after Dolashvili began her studies at UMBC, Russia invaded her hometown.

“My parents told me that Russian tanks lined the streets around my house during the invasion,” Dolashvili said. “It was impossible being away from them as life as we knew it was ending there. I did not know what my family was going to do, all I knew is that they needed to get out of Crimea.”

About a year after the invasion, her parents and sisters fled to Germany, before ultimately moving to France and seeking asylum status.

“My parents and sister were forced from a nice life in Crimea – a home, a community, a livelihood – into a single room in a refugee shelter, sharing a communal kitchen and bathroom,” she said. “They are doing well now, having moved to their own place, but this is all still hard to comprehend.”

The turmoil has not soured Dolashvili; rather, it has fueled her educational pursuits in global studies and international politics. She said that in the classroom, she often finds herself giving the inside scoop on Eastern Europe and what life is like there.

“People in different countries can be told different things about an issue or event; you have to step back and think about all the perspectives that are involved before you can understand what is really happening,” she said.

She learned that lesson in a political geography class. As the professor discussed World War II, Dolashvili was surprised to learn new details and hear a different perspective on how the war unfolded and who the major players were.

“History lessons in Ukraine emphasized certain aspects of the war – and the Soviet Union’s role in it – that made me believe that we were heroes for winning the war,” Dolashvili said.

Dolashvili said she loves living in the United States and hopes to continue living here “in the land of opportunity.” She also wants to serve the country and plans to join the Army upon graduation.

She joined the START internship program to round out her classroom knowledge and learn more about terrorist organizations. She works with the Unconventional Weapons and Technology team conducting open source research on the Islamic State of Iraq and the Levant (ISIL), Aum Shinrikyo and other groups.

Though she is excited by the opportunity to make a life and career in the United States, Dolashvili said she misses her family and hopes that she can spend time with them soon. She is also happy that it’s finally spring and that she can begin a patio garden.

“Gardening reminds me of my family and makes me feel like they are here with me,” Dolashvili said. “We grew most of our own produce when we lived in Ukraine – basil, cilantro, zucchini were my favorites. Gardening is different here. I have to order seeds online or buy them at the store, but it’s still a good reminder of where I came from.”