With the release of their new book “The Three Pillars of Radicalization; Needs, Narratives and Networks” and resulting book tour, START Researcher Arie W. Kruglanski and his co-authors Jocelyn Bélanger and Rohan Gunaratna provided crucial insight for governments searching for ways to mitigate contemporary terrorism. Based on rare field research with terrorists, their book delineates the drivers of radicalization and offers a deradicalization model rooted in psychology and an individual’s quest for significance.

“Radicalization arises from individuals’ needs, ideological narratives, and support networks that in conjunction produce violent extremism,” Kruglanski said. “Individuals’ need for significance and mattering when conjoined to a narrative that advocates violence as a path to significance and a network that socially validates the narrative, creates a combustible psychological mixture that threatens social stability and global peace.” 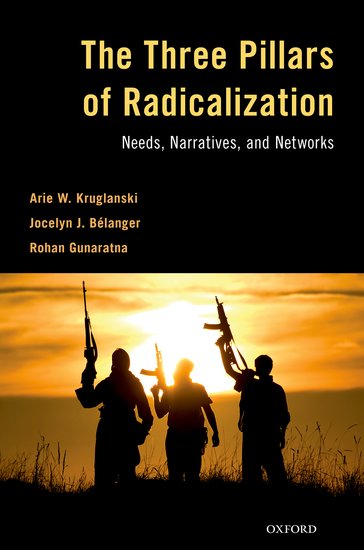 During each stop of their book tour, the authors conveyed three main points:

“The Three Pillars of Radicalization” was released by Oxford University in May, and the book tour was launched in June at the University of Maryland’s START Center featuring the honorable Juan Zarate, who served as deputy national security adviser under the George W. Bush administration.

After the U.S. launch, the authors discussed their work at Kings College London, the Henry Jackson Society and the Royal United Services Institute (RUSI) in London. They then attended the Asia-Europe Counter-Terrorism Dialogue 2019 in Malaysia to speak about their book to the Minister of Foreign Affairs, Dato Saifudin bin Abdulla. More recently, they presented their work at New York University Abu Dhabi in the United Arab Emirates.

"This deeply researched international study is a major contribution to understanding the roots of radicalization, one of the most serious security challenges of today,” said Lord Jonathan Evans, KCB, DL and Director General, British Security Service (2007-2013).

“The Three Pillars of Radicalization” was endorsed by major academic experts on radicalization, Professors Martha Crenshaw, Scott Atran and Gary Lafree, as well as major military and security experts including General John Allen, former commander of NATO ISAF and U.S. forces in Afghanistan and Special Presidential Envoy to the Global Coalition to Counter the Islamic State.

The book is available in hardcover and EBook versions. To order, please click here.