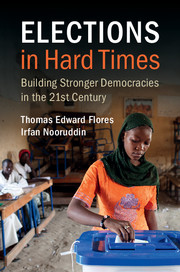 On Friday, September 30 from 11:00 am to 12:00 pm, Thomas Flores and Irfan Nooruddin will give a book talk at START headquarters on their book "Elections in Hard Times". The event is free and open to the public, but RSVP's are appreciated.

Thomas E. Flores is an Associate Professor at the School for Conflict Analysis and Resolution at George Mason University. His research focuses on democratization, conflict, and economic development. In addition to Elections in Hard TImes, his research has been published in the Journal of Politics, Journal of Conflict Resolution, Review of International Organizations, Social Psychological and Personality Science, among other peer-reviewed journals. He earned his Ph.D. in Political Science from the University of Michigan in 2008 and his B.A. magna cum laude from Harvard University in 1998. In 2006, he studied land reforms in Colombia as a J. William Fulbright Scholar. Professor Flores has also served as a consultant to the Center for Complex Operations at the National Defense University and the United States Agency for International Development. Professor Flores teaches courses on the political economy of civil war, global conflict, and research methods.

Irfan Nooruddin is Professor in the Edmund A. Walsh School of Foreign Service at Georgetown, and is a member of the School’s Asian Studies Program. He is the author of Coalition Politics and Economic Development: Credibility and the Strength of Weak Governments (Cambridge, 2011). Professor Nooruddin’s specializes in the study of comparative economic development and policymaking, democratization and democratic institutions, and international institutions. He has been a Fellow at the Woodrow Wilson International Center for Scholars in Washington, DC, and is a Team Member with Lokniti: Programme on Comparative Democracy at the Centre for the Study of Developing Societies, New Delhi.