Book Talk: John McCauley, "The Logic of Ethnic and Religious Conflict in Africa"

Book Talk: John McCauley, "The Logic of Ethnic and Religious Conflict in Africa"

On Thursday, July 6 from 11:00 am to 12:00 pm, University of Maryland Professor John McCauley will give a presentation at the START office about his latest publication, The Logic of Ethnic and Religious Conflict in Africa. The event is free and open to the public, but RSVPs are appreciated. 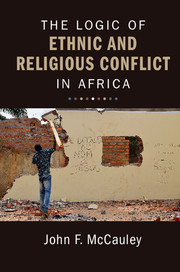 John McCauley is an Associate Professor of Government and Politics at the University of Maryland.  His research focuses on ethnic and religious politics, economic development, and informal political institutions in Africa.  He has conducted field research in Burkina Faso, Chad, Côte d’Ivoire, Democratic Republic of Congo, Ghana, Madagascar, Niger, and Nigeria.  Dr. McCauley received his Ph.D. in Political Science from the University of California, Los Angeles. He has a B.A. in Economics from the College of William & Mary and an M.A. in International Relations from Yale University.

The Logic of Ethnic and Religious Conflict in Africa (Cambridge University Press, 2017) explains why conflicts in Africa are sometimes ethnic and sometimes religious, and why a conflict might change from ethnic to religious even as the opponents remain fixed. Conflicts in the region are often viewed as either “tribal” or “Muslim-Christian,” seemingly rooted in deep-seated ethnic or religious hatreds. Yet, as the book explains, those labels emerge as a function of political mobilization:  ethnicity and religion inspire distinct passions among individuals, which political leaders exploit to achieve their own strategic goals when the institutions of the state break down.  The book applies the argument to several cases of civil conflict and to the recent wave of religious terrorism in the Sahel.

The Conversation: As states reopen, tensions flare between the rule followers and rule breakers
Business Insider: Why anti-lockdown protests are a 'magnet' for white supremacists and far-right extremists
Vox: Media coverage has blown anti-lockdown protests out of proportion
END_OF_DOCUMENT_TOKEN_TO_BE_REPLACED