Kurt Braddock’s ‘Weaponized Words’ teaches how to outtalk a terrorist

The shockwaves of the September 11th attacks gave way to a career-defining question for a then-20-year-old Kurt Braddock: what could drive others to kill innocent people in the name of a political cause?

Rather than follow the trajectory of his business school undergraduate career, he decided he would either join the military or go to graduate school to serve a counterterrorism mission. 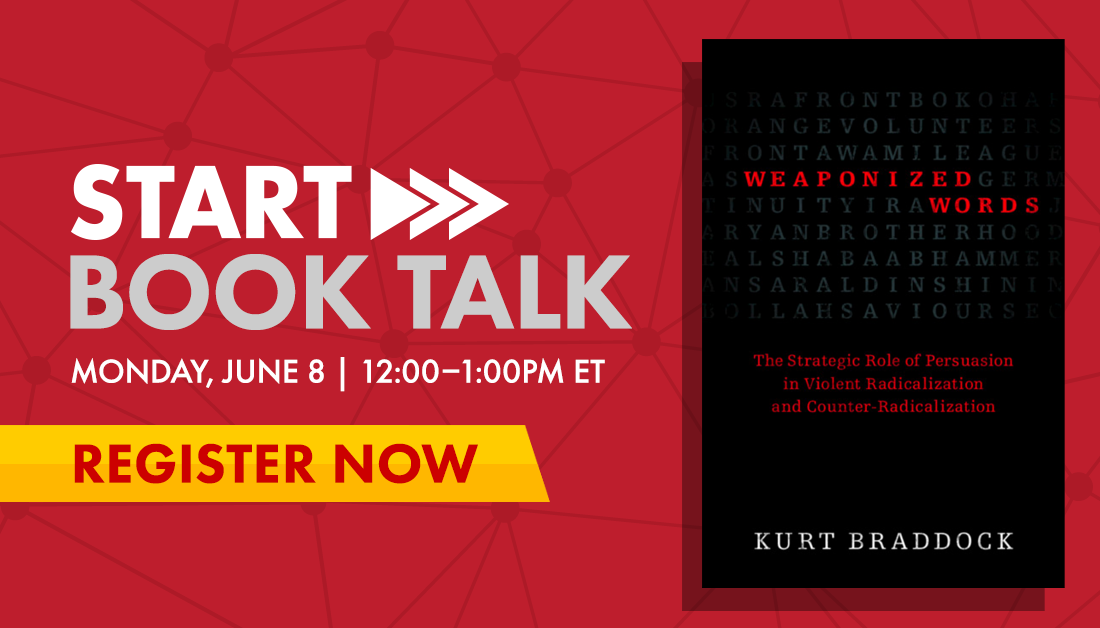 “I saw each of those choices as opportunities to fight against those who were killing civilians,” Braddock said. “I wanted to understand what was happening and take action against this existential dread I felt.”

While figuring out what to do next, he picked up Simon Reeve’s book “One Day in September.” It analyzed the full story of the Munich Olympics Massacre and Israeli revenge operation “Wrath of God,” and it also pushed Braddock to think about how communication and terrorism intertwine. He ultimately decided to pursue graduate school at the University of Delaware, where he studied group communication in the context of terrorism and political violence.

“This book and others I picked up at the time catered to individuals such as myself, who had no real understanding of terrorism or terrorist acts in the past,” Braddock said. “It really helped me have access to a subject that I wouldn’t have known otherwise, and inspired me to look further into ways I could fight back.”

After earning his master’s degree in Communications from the University of Delaware, he moved onto Penn State University for a doctoral program in Communication Sciences, where he worked at the International Center for the Study of Terrorism (ICST). There, he studied how terrorists utilize communication tactics to persuade potential members to join their organizations.

After earning his doctorate, he became an assistant teaching professor at Penn State, and also served as an advisor to several policy-making entities—including the U.S. Department of State, the United Nations Counterterrorism Executive Directorate and the U.S. House of Representatives Committee on Homeland Security.

This fall he will join American University as an assistant professor of public communication, conducting research that focuses on the use of communication theory to explain psychological phenomena related to terrorism and political violence.

His new book, “Weaponized Words: The Strategic Role of Persuasion in Violent Radicalization and Counter-Radicalization” seeks to address a gap in the current literature about  communication in terrorism, and superimpose theories of persuasion onto the context of terrorism. To frame his research, he took cues from political communication and health communication strategies.

By grounding the successes and failures of terrorist organizations in common communication theories, Braddock’s book “Weaponized Words” furthers our understanding of persuasion methods in terrorist recruitment, and invites a new way of viewing counterterrorism tactics.

“The reason why I did it this way was because in terrorist negotiation or counterterrorism measures, time, money and lives are at stake,” Braddock said. “If we can save time by implementing commonly known and simple communication theories to counteract violent actors, we can save more lives before they are lost.”

“Weaponized Words” takes the reader through four theories related to persuasion tactics while making it accessible and applicable to practitioners, academics and the general public. Every chapter begins with a story to illustrate the theory it will further examine, framing it in a way that is relevant to a wide range of audiences.

“I was very intentional about the book being accessible to all,” Braddock says. “I want anyone to be able to read this book and understand it, kind of like me in 2001 with ‘One Day in September.”

Braddock said the goal of the book is to support counterterrorism efforts by helping readers understand common persuasion practices utilized by extremists and violent actors.

“When you can understand how communication theory is utilized in persuasion, you can use that theory to prevent organizations from inducting more members and people from being attracted to these organizations,” Braddock said.

Braddock will present a virtual book talk on “Weaponized Words” hosted by START at 12 p.m. ET on June 8. Register here to attend this event.