Drawn from a first-of-its-kind database (the Bias Incidents and Actors Study [BIAS]) on nearly 1,000 violent and nonviolent hate crime offenders in the United States, a new research brief by the University of Maryland’s National Consortium for the Study of Terrorism and Responses to Terrorism (START) shows that offenders vary significantly in terms of motivations, background and demographic characteristics, criminal histories, and targets.

While bias on the basis of race, ethnicity, and nationality was the most prevalent motivation for the offenders in the BIAS dataset, there has been an increase in recent years in hate crimes committed by individuals who selected victims because of their sexual orientation and/or gender identity. Furthermore, hate crimes targeting victims perceived as Latinx and Muslim and/or Arab grew from less than 5 percent in the 1990s to represent nearly a quarter of all attacks combined over the last two decades.

“We are seeing that there is a lot of diversity in terms of who is committing hate crimes and what their motivations are,” said Michael Jensen, START senior researcher and lead investigator of the BIAS project. “There is a wide range of prejudices, background characteristics, educations, and work histories. Their behaviors are diverse too. Not every offender commits an act of violence; not everyone is part of an organized group. While some offenders carefully plan their crimes to maximize their impact, others act without premeditation in response to prejudices that are pervasive in American communities.” 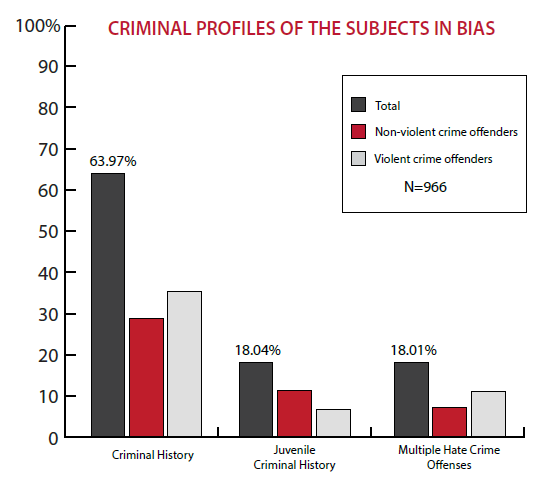 “The criminal backgrounds of offenders are quite high, as well,” Jensen said. “More than 60 percent of the offenders in BIAS had criminal records prior to committing hate crimes.”
Jensen and his colleagues, Elizabeth Yates and Sheehan Kane, found that among those who committed violent hate crimes, 71 percent targeted victims on the basis of race, ethnicity, or nationality. Attacks targeting African Americans account for more than 40 percent of the violent and nonviolent crimes in the database.

Overall, the individuals in the database who selected their victims on the basis of their perceived religion were less often violent than other types of hate crime off­enders. These offenders often committed property crimes against symbolic targets, such as mosques and synagogues. At the same time, Jewish targets were greatly over-represented as victims of mass casualty attacks compared to other types of violent crime. While anti-Semitic perpetrators account for only 10.4 percent of all o­ffenders in the BIAS data, they comprise over a third (38.1%) of the individuals in the data who planned or committed mass casualty attacks. 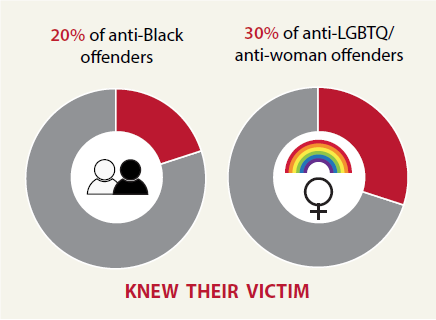 The research team also found that although most hate crime off­enders had no previous relationship to their victims, nearly 20 percent of those motivated by anti-Black sentiment, and nearly 30 percent of those motivated by hate towards women or perceived lesbian, gay, bi-sexual, transgender, or queer people (LGBTQ), knew their victims prior to the attack.

The brief "Motivations and Characteristics of Hate Crime Offenders," is available on the START website. It is the first in a series of briefs exploring the new BIAS dataset. Additional briefs will explore violent hate crime and mass casualty offenders, as well as typologies of offenders. START plans to release the full BIAS dataset in early 2021.