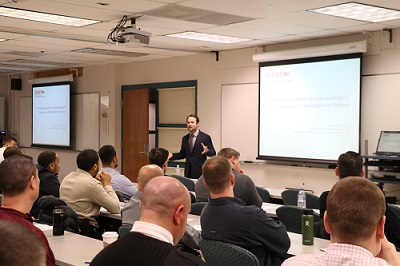 The seminar is held annually for police department members to learn about various topics related to terrorism and homeland security. This year’s topics included foreign and domestic terrorism, active assailant incidents and a case study of Nicholas Young, the Washington Metropolitan Area Transit Authority (WMATA) officer who was arrested for attempting to support the Islamic State.

This was the third year that John Haddaway, who is the Homeland Security Team Supervisor with the BCoPD, has been organizing the seminar.

Haddaway said that the goal is to provide officers with the information and tools they need to function in an ever-changing environment regarding extremism, terrorism and securing the homeland from foreign and domestic threats.

“We try to keep the seminar fresh by engaging speakers to provide information about resources, trends, case studies and other topics our officers may not normally be exposed to during their duties,” Haddaway said.

Koven’s presentation included data from the Global Terrorism Database (GTD) and the Profiles of Individual Radicalization in the United States (PIRUS) dataset as he explored the motivations of terrorist actors.

“Terrorist groups are trying to accomplish some type of political gain,” Koven said. “The goal is not battlefield victories, but rather, victory results through fear and coercion. Terrorists seek to convince the target population that, for example, the cost of opposing the terrorist group is too high. To this end, the 3,000 people who died on 9/11 were not al-Qaida’s primary intended targets; rather it was the more than 300 million Americans who were not killed or injured on that day, but who were nonetheless deeply affected.”

Haddaway first learned of START at a SHIELD Conference last year, when members of the London Metropolitan Police requested that he connect them with START for a tour of the START offices and a meeting with START staff.

“I knew that START was an excellent program, and after meeting with members of the START team I couldn’t believe this resource was so close, yet untapped in our general area,” Haddaway said.

In March, the BCoPD will also participate with other community members in an iteration of Coalition-Building for Countering Violent Extremism and Community Resilience, one of the trainings offered by START under a FEMA grant.

National Institute of Justice: Hate crimes: National database identifies traits and motivations marking distinct pathways of people who commit bias-based offenses
Business Insider: Inside a DC jail's 'Patriot Wing,' where Capitol riot defendants sing the national anthem and act like prisoners of war — but struggle to cope with being locked up
USA Today: When does speech become dangerous? Rep. Gosar’s ties to white nationalists added to concerns about his video
END_OF_DOCUMENT_TOKEN_TO_BE_REPLACED