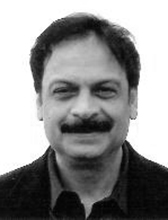 Prabhakar Misra is an American physicist, who researches and teaches at Howard University in Washington, D.C., and is currently a Professor in the Department of Physics and Astronomy. Born and raised in India, he came to the United States to pursue graduate studies in physics. He earned an M.S. in Physics from Carnegie Mellon University in 1981 (Pittsburgh, Pennsylvania), followed by a Ph D. in Physics in 1986 from The Ohio State University (Columbus, Ohio). After a post-doctoral fellowship at the Laser Spectroscopy Facility of The Ohio State University, he joined Howard University in 1988. He was a Visiting Scholar in 1990 at Northwestern University in Evanston, IL.

Prof. Misra, Co-Investigator on the “Dynamic Response of the Environments at Asteroids, the Moon, and moons of Mars" (DREAM2) team, received the 2018 Robert H. Goddard team award for excellence in science (PI/Team Lead: Dr. William Farrell, NASA Goddard Space Flight Center). The citation reads: “For excellence in the application of space environmental science to exploration applications.”