The COE Summit is a unique opportunity for attendees to connect and network with COE researchers, DHS components, federal, state and local stakeholders, as well as industry partners, to present current and emerging solutions to threats and challenges faced by DHS.

START Counterterrorism Portfolio Lead Dr. Barnett Koven first presented on the panel “Network Discovery from Data,” in which he discussed the model his team developed for predicting gray zone conflicts with the Shadows of Violence: Empirical Assessments of Threats, Coercion and Gray Zones project.

“We started off with an extremely basic model,” Koven said. “We wanted to predict gray zone conflicts based on the type of data source, who the target of the gray zone action was and if the event was kinetic in nature, like an artillery duel.”

Koven went on to explain that the overall predictive accuracy for black zone (wartime) and white zone (peacetime) events in the model was in the mid-80 percentage range. For gray zone events, which are more difficult to accurately predict, the predictive accuracy was just over 75 percent.

“This actually has real world implications,” Koven said. “It not only allows the U.S. government to better predict what’s going to happen next, and forestall competitor aggression, but it also gives us opportunities for improvement in U.S. responses.”

Miller discussed the new project that the GTD team is working on, which will gather data on terrorism and targeted violence in the United States.

“This new project is still in its preparation stages,” Miller said. “It will focus on a super set of targeted violence attacks in the U.S. That’s kind of interesting as a pragmatic issue of how we adapt our inclusion criteria, and definitions of targeted violence, and whole new sets of discussions of what the boundaries are as a practical matter around the concept of targeted violence.”

“I’m so excited about this dataset,” panel moderator and NCITE Director Gina Ligon said. “I feel like so many academics have just been waiting for this kind of data to be produced with the kind of effort and expertise that START can put behind it. One of the things that START has been so foundational in is the generation of knowledge about terrorism attacks – there’s really no better source for that than the GTD. So I’m really excited to know that Dr. Miller is leading the charge in developing such a dataset for domestic events, because I have no doubt that it’s going to be just as intensive, data driven, reliable and valid as the GTD.”

“The MPS program represents an amazing opportunity for individuals already within the homeland security sphere to advance their careers, as well as for those who are looking to get into the field,” Boyd said.

Cyber Intelligence Researcher Rhyner Washburn was also featured in a recording of a panel on “Countering Developing Risks to the U.S. Maritime Transportation System.”

“When we look at the cybersecurity of maritime transportation systems, we have to look at it not just in the siloed critical infrastructure sense, but also in the interconnectedness of those systems,” Washburn said.

Washburn explained that an attack on one port impacts many other ports and transportation systems, creating a cascading effect resulting in the disruption of goods and services. He also noted that the threat of such disruptions may be increasing.

“Are we seeing more private sector industry members becoming targets of opportunity, or are they just more targeted by nation states? Unfortunately, I see it as a melding of both,” Washburn said. “We have issues that range from both nation state, military-grade type of actors, to what we call ‘script kiddies,’ those non-state actors who are just doing this for fun. So there is a variety of threat actors, but prioritizing those threat actors is key.”

START students Meira Goldfischer, Roula Kanios and Joseph Reed also had an opportunity to present a poster at the Summit, in which they explored the connections between conspiracy theories and radicalization with a focus on QAnon. 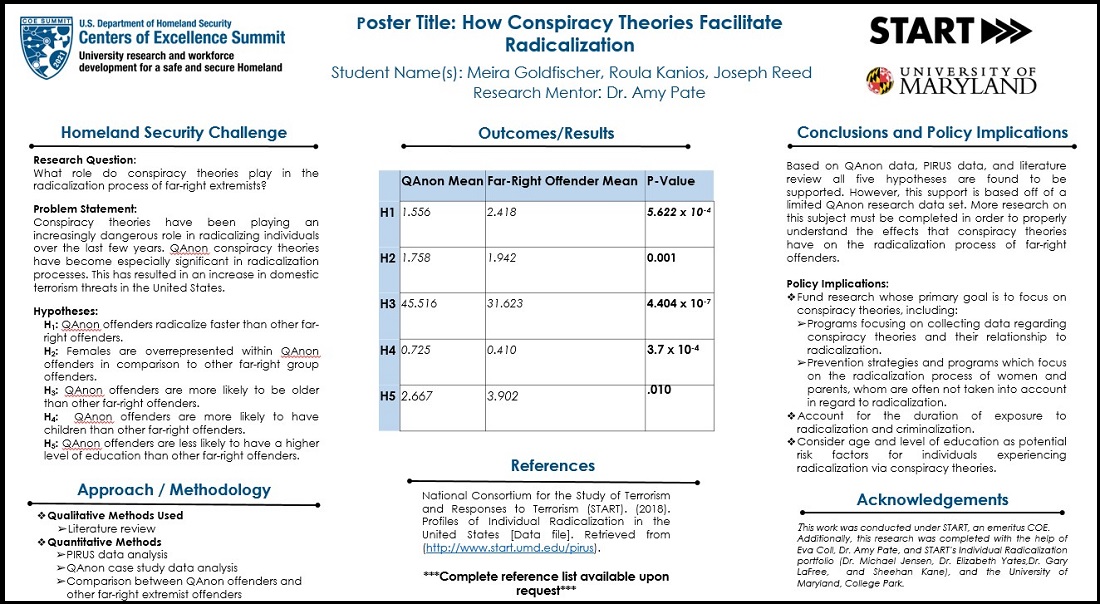 “The team came together to create a great poster on a very timely topic,” said START Executive Director Amy Pate, who mentored the students. “By comparing the subset of QAnon offenders within START’s Profiles of Individual Radicalization in the United State (PIRUS) data to other far-right offenders, they were able to highlight the particular threat of the QAnon constellation of conspiracy theories.”

Other START staff also praised the students’ efforts for the poster presentation session.

“They did really well,” START Education and Training Program Director Liberty Day said. “It was professionally presented and they handled the judges' inquiries in such a way that showed a true mastery of the subject.”